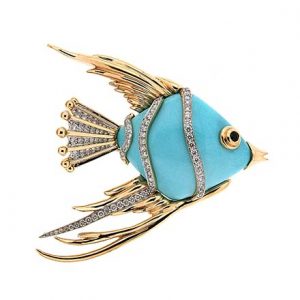 There is no color as soothing as the color of an azure sky. The cloudless blue sky is the harbinger of our reflective minds. They tend to take us away from the madding crowd and into a world where peace reigns. A glimpse of the turquoise stone will transport you into such a world where you will be able to communicate with truth. A strong stone of spiritual attunement, turquoise seems to be carved from the azure sky and dropped to earth. The tranquil color of the stone is enough to lure us into a world of magic.
The word turquoise, comes from the French expression Pierre tourques which implies ‘Turkish Stone’. The name was conferred around the 13th century, throwing much light on the fact that the stone first entered Europe from the Turkish sources.

A stone that has been prized for centuries, turquoise has a history as rich and beautiful as its color. Persia is one of the earliest known turquoise mining areas in the world. Turquoise produced from this region were popular for their pure, robin’s egg blue color. The rulers of the ancient Egypt used to adorn themselves with jewelry made of turquoise. In fact, the earliest record of turquoise being used in jewelry came from the ornaments used by the Egypt. They were found amongst the royal burials dating over 6000 years old. Chinese artisans were known to be carving it for more than 3,000 years ago. Turquoise eventually became the national gem of Tibet.
It was recognized as a ceremonial gem and was a medium of exchange for Native American tribes in the Southwestern US. Over 2000 years ago, the gem was used in the Chaco Canyon area of New Mexico. As per archeologists, the ancient native American tribes began the mining of turquoise stone at the mineral Park Mine thousands of years ago. Around the 19th century, the Navajos tribe began producing the most popular varieties of turquoise jewelry, the method which is still very much followed even today. The Navajo turquoise has a history that dates back to the prehistoric times. Many ancient mining sites have been unveiled in and around the Southwest.
The demand for turquoise rose and fell over the years, yet it never went out of the scene completely. The demand rose in the United States in the early 1970s, but dropped in the 1980s. 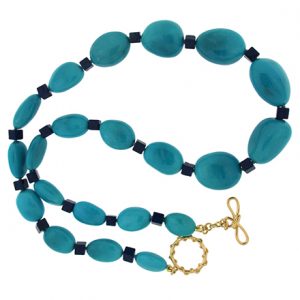 Turquoise is available to us today in the following variety:
Eilat Stone: Available from the copper mines near Eilat, Israel, they are the greenish-blue mixture of Chrysocolla, Turquouse and other minerals of copper.
Navajo Turquoise: They are turquoise with black and brown spots on them and are available from the American Southwest, predominantly Arizona.
Cerrillos Turquoise: Mined from a prehistoric mining district in the American Southwest, is the only turquoise formed at the base of a volcano. Thus, a large variety of colors develop from the minerals. Seventy five colors have so far been identified.
Kingman Turquoise: Available near Kingman, Arizona, this type of turquoise is known for its beautiful color.
Indian Mountain Turquoise: They come from the Lander County, Nevada and is one of the best available from the contemporary mines.
Persian Turquoise: From the ancient mines of Iran, mainly Nishapur comes the high quality pure turquoise. They do not possess any brown or black veins or any embedded matrix.

The pure and radiant blue colored turquoise is considered to be the most highly sought after. They are highly esteemed. The more the color is towards the greenish side, the more blotchy and irregular the matrix. As a result the stone’s quality becomes much lower. Most of the world’s turquoise comes from the southwestern United States, Egypt, Mexico, Iran, China and Chile.