From the pale blue of the summer sky to the deepest azures of the ocean, aquamarine sparkles in an extraordinarily diverse range of blue hues. A spectacular plunge into the unsullied sphere of beauty, aquamarine is an exquisitely beautiful gemstone.

Staying true to its sobriquet, derived from the Latin word of seawater – aqua marina, aquamarine is a blue or cyan variety of the mineral beryl. Aquamarine is also regarded as the birthstone for March as well as the gemstone of 19th wedding anniversary. The finest of aquamarines combine distinctively high clarity with lucid transparency in an array of blue to faintly greenish blue shades.

How can you assess and determine the value of an aquamarine?

Superior aquamarines are a delightful amalgam of clarity and color. The finest are the light greenish blue to dark blue with no visible inclusion. Careful cutting of the stone maximizes these twin qualities to produce splendid gems. Assessment of these four characteristics will help you decide the value of an aquamarine:

Why celebrate and admire aquamarine? 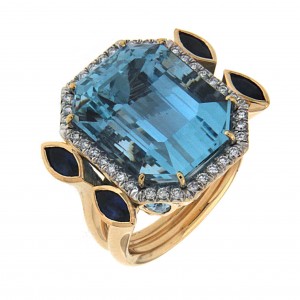 Lucidity: The sheer transparency of a faceted aquamarine is remarkably exceptional with translucent luster that actually sparkles.

Dichroic: With help of a dichroscope, you can explore the surprising color play in an aquamarine. The enchanting dichotomy of shades is nothing short of a marvel. You can see that aquamarine is virtually colorless and somewhere stronger blue in different crystal directions.

Jewelry designers have been singing paeans about the utter versatility of this stunning gemstone. Whether creatively cut in an unconventional cut or fashioned in the classic step cut, it is surprising how impeccably aquamarine lends itself to contemporary as well as traditional designs.

Aquamarine is an ideal and irresistible accessory whose magical charms only few can deny.

Among its watery associations, ancient Greeks and Romans used the jewel as a protective charm for seafaring journeys. They believed that carving the image of Poseidon on his chariot upon the stone gave the jewel special powers. Wearing the sea-god enhanced gemstone would make its owner fearless, providing the courage needed to flourish at sea while staying safe from harm.  Aquamarine’s connection with bravery persisted well after the Roman Empire. Arnoldus Saxo wrote in 1220 about the powers of beryl, and how the jewel family made its wearers unbeatable. Not only were its owners successful in battle, they did well with legal issues, beryl offering aid in regards to litigation. The gem family also made people wittier, industrious and friendly.

Beryl, including aquamarine, was believed to improve interpersonal relationships. Dreaming of aquamarines was believed to indicate new friends to come, and beryls of upcoming happiness. If a frog was carved onto the jewel, it gained the ability to calm disputes among enemies and to renew friendships. Beryl also rekindled love among married couples. A woman wearing an aquamarine was believed to gain a happy marriage.

Aquamarines were believed to enhance courage and protect against harm. When engraved with Poseidon, the jewel’s powers gain a nautical edge. As a member of the beryl family, aquamarines are linked with abilities connected to love, friendship, and being invincible. Aquamarines even have a small connection with angels and other supernatural beings.