Coming from the Singhalese phrase ‘tura mali’ which implies ‘stone mixed with vibrant colors’, Tourmaline stands true to its name. It is one of those few gemstones which comes in a cluster of different colors. A semi-precious gemstone, tourmaline comprises of a group of 27 minerals with the Schorl tourmaline and the Elbaite tourmaline being the most popular ones. The latter comes in an incredible variety of vibrant colors like red, pink, light blue, light green, yellow, etc., When talking of tourmaline, it is the Elbait tourmaline which most people refer to. The Schorl tourmaline on the other hand is known as being a stone of strong protector.

Tourmaline has one of the most cheerful and colorful personality amidst all the semi-precious gemstones. Owing to its multicolor nature and its metaphysical properties it has garnered huge popularity over the years. Tourmaline comes in a sweeping range of colors that varies from black to bluish-black, dark to medium brown, red to reddish purple, lime to dark forest green, blue to neon blue, pink, yellow and even colorless. In 1912, the American National Association of Jewelers hailed tourmaline as the official birthstone for the month of October. It is also considered to be the traditional birthstone for the month of October or the stone for the Zodiac sign of Leo. It is also the ideal gemstone for the 8th wedding anniversary.

The History of Tourmaline:

Tourmaline is said to have been discovered on the Isle of Elba. The Dietrich traced its use as decorative stones as far as 27 BC to 395 AD. According to a certain story as narrated by the Dietrich, the Archduchess Marie-Anne of Austria gifted the Duke Charles of Lorraine a decent size of tourmaline specimen to add to his collection. Tourmaline was well known to the Dutch as early as 1703. According to an Egyptian legend, whilst on its way up from the center of the earth tourmaline traversed over a rainbow and acquired all the colors. For many centuries, the Chinese have been engraving and carving different types of figures with tourmaline. They are still exhibited in museums which stands as a true testament to the durability.

Various cultures held different beliefs about the virtues of tourmaline. The 18th century literature regarded the stone as a great booster to those people in the creative fields. According to a Dutch scientist, tourmaline when wrapped in silk and placed on the cheek of a feverish child would easily make him fall asleep. The Africans used the stone to awaken people from ‘the dream of illusion’. The stone is highly valued by the alchemists owing to its pyroelectric effect. The Indians used the stone as a tool to help clear one’s insight and to discover the good. The stone is still used as a talisman by the African, Native American tribes and the aboriginal groups in Australia.

Today, tourmaline owes its popularity to Kunz, who way back in 1875 persuaded and convinced Charles Tiffany of Tiffany & Co. to buy the gemstone. Eventually the promotion of the stone by Tiffany & Co. led to the widespread popularity of the stone. The demand for tourmaline rose after the Second World War and after the discovery of some of the biggest tourmaline mines in Minas Gerais State in Brazil.

The Beauty of Tourmaline: 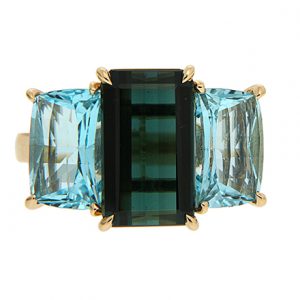 The beauty of tourmaline lies in the many unique features it is blessed with. Apart from the fact that it is blessed with a spectrum of colors, tourmaline is also considered to be a powerful healing stone and is a stone with the most metaphysical properties. It is known to change its color under different lighting conditions. According to some people no two tourmaline comes with the exact color and hence for this particular reason, they are often termed as the ‘magic’ stone. Due to its occurrence in all types of colors, tourmaline is a gemstone of energy, compassion and tolerance.
Tourmaline is both pyroelectric as well as piezoelectric which implies that it acts as its own source of electric charge. When put under great pressure or when it is drastically cooled or heated, a tourmaline forms electrical charge, which are capable of producing infrared waves and negative ions. Tourmaline effectively helps in the detoxification process of the body. They are also known to cleanse the nervous system, the tissues and other organs of the body. In addition, tourmaline helps in reducing stress, improve circulation, activate the immune system and has a great stabilizing effect on the nerves.

The blue indicolite, pink rubellite and the green verdelite are some of the most sought after and expensive varieties of tourmaline. The colored tourmaline is widely fashioned into pendants, earrings, bracelets, necklaces and various other accessories. Given its unique features and color variety, tourmaline will surely continue to thrill jewelry designers and gem collectors for years to come.