Topaz, a gemstone synonymous with ‘brilliant’ and in every sense of the term, have often been rightfully described as a beautiful substitute to the very coveted diamond and even sapphire. Topaz is blessed with a vitreous luster and a brilliance like none other and owing to the range of colors it is available in, it has a mass appeal. It is not surprising that the most authentic and breathtakingly beautiful topaz is not just rare but expensive as well. Even though not much knowledge could yet be garnered about topaz, people are much intrigued due to the wide color range it comes in. It is found in a spectrum of colors like blushing pink, yellow, amber gold, sherry red, blue, orange, green, violet etc. Pure topaz is said to be colorless. There are some extremely rare variety of topaz like the pink to reddish orange or yellow and the violet.
Topaz comes from the Greek word ‘topazion’, which originally comes from the Sanskrit word ‘tapas’ meaning ‘fire’. There are also evidences to suggest that it may have been named after the Egyptian island St John’s which was then known as ‘topazos’. Another endearing quality of topaz is its pleochroic feature which implies that the intensity of the color changes when viewed from different angles. This charming and dazzling stone has become a popular choice for jewelry designers who are largely using them in making fashionable jewelry. 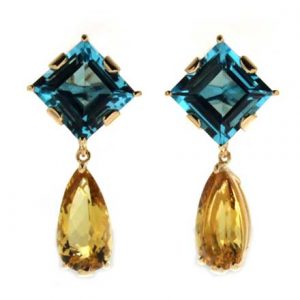 As rich as its beauty, is topaz’s history. Throughout history, different color topaz has been mined and owned by the queens and kings. According to them topaz was the provider of wisdom and knowledge. It was presumed to be a symbol of Ra, the Sun God, by the Egyptians who also considered it to be a provider of life. In short, the Egyptians highly revered the gemstone. According to the belief of St. Hildegard topaz could cure people suffering from weak vision. The ancient people also believed that the stone helped improve taste buds, calms the mind and helps those in bad moods.
Even the Greeks and Romans have always highly valued the stone. According to the ancient Greeks, topaz endowed the wearer with strength. They were even known to assure one of invisibility especially during times of emergency. According to the Romans, topaz owes its color to the sun. Ancient rulers largely wore topaz in jewelry. Topaz is also found mentioned in the Bible where it was described to be a protector of New Jerusalem. One of the twelve stones that comprised the breastplate of High Priest Aaron was topaz.
The European people linked topaz with Apollo and with solar energy. Topaz was also presumed to be associated with breaking magic spells and lessen the anger of the wearer. People also believed that the stone helped those who always wanted to embark on a journey of self-realization. Topaz is still today associated with many healing properties. It is a stone that is believed to balance emotions, improve one’s ability to communicate, bring good fortune and ensure success in one’s life. Besides, it also ensures the wearer peace, spiritual love, hope, generosity, good health, creativity and joy.

Topaz’s variety is due to the range of colors it is available in. We therefore have such varieties as pink topaz, blue topaz, yellow topaz, sherry topaz and white topaz. We have pure topaz which are typically transparent and generally comes with impurities. Another special variety is the orange topaz which also goes by the name precious topaz. Orange topaz is the birthstone for the month of November. It is also hailed as the state gemstone of Utah of the US state.

Another sought after variety is the imperial topaz. They are generally yellow, pink-orange or pink and are available in Ouero Prito, Brazil. The Brazilian imperial topaz ranges from bright yellow to deep golden brown color and may even be violet. Imperial topaz is also known to sometimes fade in color owing to an extended period of exposure to the sun. Pycnite is another columnar variety of topaz which are also referred to as the yellow-white variety.