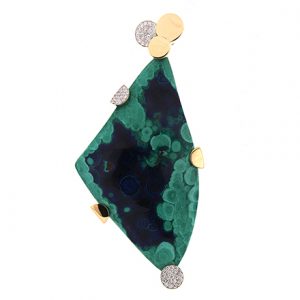 The jewel is a copper carbonate hydroxide. Its chemical formula consists of two copper atoms, a carbon atom bonded to three oxygen atoms, and two sets of oxygen linked to hydrogen. Malachite is allochromatic, meaning that its source of color is inherent to its structure rather than trace minerals or other outside influences. For this stone, copper is responsible for its greens.

Malachite is relatively fragile with poor toughness, or resistance to impacts. It sits between 3.5 and 4 on the Mohs Scale of Mineral Hardness, which measures a stone’s ability to resist scratches. The stone is sensitive to heat and hot water, and ground malachite has moderate stability against light. Its tenacity, or behavior when deformed, is brittle, turning malachite into a powder.

In terms of crystal, malachite belongs to the monoclinic system. Its smallest components form a rectangular prism when viewed from its long sides, and parallelograms when viewed from its short ends. The jewel’s crystal habit, or how it looks to the naked eye, can be massive with an appearance resembling stalactites. Malachite can also be botryoidal or mammillary, or take on rounded shapes clumped together.

Depending on the angle, malachite’s greens can take on a yellowish hue, though bluish or true green is more common. For the most part, its colors are saturated, with a light to dark tone. Its luster varies, ranging from glass like, silky or dull. When dragged across a streak testing plate, it leaves a verdant mark.

Formation and Sources
Malachite is a common byproduct of copper oxidation zones. As copper ore weathers, it mixes with other elements, eventually forming into a variety of minerals. Malachite is often found with other stones which are born this way, such as azurite, turquoise and goethite. The copper content of malachite is strong enough that ancient people smelted the stone to extract the metal inside.

The jewel is found on several continents, including Asia, North and South America and Africa. In the United States, malachite is mined in Arizona’s Bisbee mine. While Russia used to unearth the stone from the Ural Mountains, it stopped in recent years. Namibia and the Democratic Republic of Congo have one malachite mine each, while Peru has three.

Uses
Malachite’s low hardness and tenacity was advantageous to generations of artists. When ground down, gemstone is used as a pigment. The hues it creates varies, presumably depending on the color of the original jewel. Its light fastness may have been another factor leading to this use. Malachite based coloring fell out of favor when synthetic greens became available.

As a gemstone, malachite’s opacity makes it best suited for cabochon cuts, as well as beads and other carvings. The jewel also lends itself well to inlays. Due to malachite’s fragile nature, the stone may be safer in jewelry such as earrings or pendants, which are less prone to impacts. With proper setting and care, the gemstone can be long lasting.

Due to its potentially large crystal habit, malachite may be formed into decorative objects of modest or massive size. Notable objects include malachite columns from Saint Petersburg, Russia’s St. Isaac’s Cathedral as well as the Malachite Rooms of Saint Petersburg and Versailles, France. Missouri’s Linda Hall Library has the largest piece of malachite on the continent, known as “La Tazza,” in its main reading room.

Azurite has a similar chemical formula to malachite, though copper gives azurite blue, rather than green coloring. The two stones form in the same environment and are often found near one another. Sometimes they combine to create the gemstone azurmalachite, a rock interspersed with both colors, creating banded and spotted patterns.

As with malachite, azurmalachite can be carved into beads, cabochons and inlays. It’s also favored as an ornamental stone, and may be displayed in a mostly rough form, with areas polished to display its hues. Other decorative objects made from the gemstone include spheres, vases and bowls.