Lapis lazuli is an opaque gemstone famed for its luxurious blues. Depending on the individual stone, it may feature streaks of white, golden flecks, and even hints of green. In ancient times, it was known as “sapphire” along with other blue gems. However, there are many features which distinguish lapis lazuli from corundum.

Unlike most stones, lapis lazuli isn’t a mineral. It’s classified as a rock, meaning it’s composed of two or more materials merged into a single form. Which minerals and in what quantities vary by rock. This leads to stones of diverse color and form. 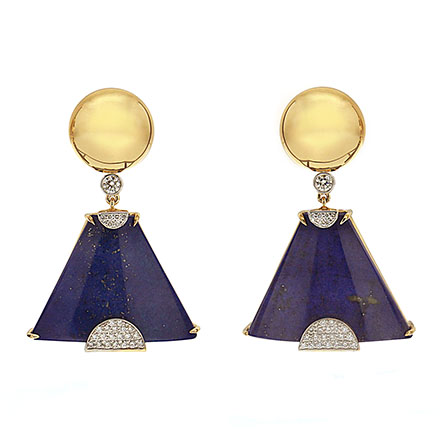 Lazurite makes up twenty-five to forty percent of lapis lazuli. This mineral has a complex chemical formula containing calcium, aluminum, sulfur and more. Together, these elements create the royal blue of lazurite, and by extension, lapis lazuli.

Calcite is a type of calcium carbonate. On its own, it’s a transparent to translucent stone with low hardness. In lapis lazuli, its translucency and softness is less apparent. Calcite manifests in the stone as white patches, contrasting against lazurite.

Pyrite is a yellow metallic mineral made of iron and sulfur. It’s responsible for the golden streaks in lapis lazuli. As with other stones, the amount varies among specimens of the stone. If there is enough pyrite in a sample, the stone takes on a greenish cast.

Many other minerals may appear in lapis lazuli. Sodalite, afghanite and hauyne also add blue to the gem. Mica contributes glitter. Diopside, nosean and augite have no fixed hue. They may bring white, blue, green or other shades into the rock.

Formation
Lapis lazuli is born through contact metamorphism. This occurs when magma pushes its way into cooler rock. The temperature difference transforms the surrounding stones. Chemical compositions and crystal structures change, turning old into new. How much alters depends on the amount of heat and distance from the magma.

Lazurite, a major ingredient of lapis lazuli, forms in limestone. The latter is a calcium-rich rock made of ancient mollusks deposited on one another. Over time, they became stone. Contact metamorphism changes limestone to lazurite, which contributes to lapis lazuli.

Sources
Some of the most celebrated sources of lapis lazuli are found in Afghanistan. Its Badakhshan province is a mountainous region where lapis lazuli has been mined since the 700s. The forbidding terrain makes mining and transport of the gem difficult. Hence, the cost and rarity even more so. Badakhshan’s Sar-i Sang mine has been active for at least 6,000 years.

In Russia’s Siberia region is the Lake Baikal area. It’s a popular tourist destination with deposits of lazurite and hauyne. These materials are mined for the lapis lazuli mixed within. One lazurite deposit is from a river valley neighboring the lake.

Chile’s Limari province is located in the Andes. Its Ovalle mines contains hauyne deposits from which lapis lazuli has been mined since 1905. It’s sometimes advertised as Chilean lapis. The gem market may use the term “Chilean” to denote greenish lapis lazuli. In truth, the country’s lapis lazuli come in a variety of hues.

The United States has its own lapis lazuli deposits in California and Colorado. California’s lapis lazuli was discovered in 1910 in Cascade Canyon. The canyon’s mine was active for a brief window in the early 1980s. Colorado’s lapis lazuli is located in Crested Butte. Its mine, known as Blue Wrinkle, was active from 1938 to the 1990s.