The world of citrine sparkles in the beautiful colors of autumn, conjuring an image of a fall forest. A crystal full of energy, citrine is one of the most admired gemstone member in the quartz family. Prized for its beautiful color, amazing vitreous luster, excellent transparency, affordability, and durability, citrine abounds with positive features and is widely known as a bringer of prosperity and success. It has therefore rightfully earned the title ‘Success Stone’. In addition, it has also been nicknamed, ‘Merchant’s Stone’ given the fact that the stone is particularly lucky for those in business when kept in the cash drawer of the shop. The gemstone is hailed as the official birthstone for the month of November by the American National Association of Jewelers in the year 1912.
Citrine is basically the yellow to golden-orange range of the quartz group of minerals and is closely related to Amethyst which is another variety of quartz. Citrine is said to be one of those few gemstones that naturally comes in the color golden to pale yellow. The color is due to the presence of iron impurities. Natural citrine is becoming alarmingly rare and therefore most of the citrine available in the market is heat-treated. In other words, it is artificially created by heat treating Smoky Quartz and Amethyst. The heated citrine usually adopts a deep orange or slightly reddish tint. The term ‘citrine’ comes from the French word ‘citron’ which means ‘lemon’. 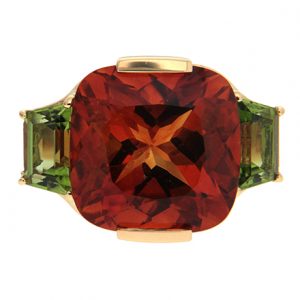 Citrine may not have shared as much popularity as the other gemstone in ancient cultures, yet it has been found mentioned in history and lore which can be traced back to over 6, 000 years. The gemstone has been extensively used in Greece and Rome during the first and second centuries. During the Hellenistic Age which span from the period 300 and 150 B.C., the gemstone was used as decorative stones by the ancient Greece. The 17th century saw the use of citrine by the Scottish men, on the handles of daggers and swords. There were also reports of the entire handle being crafted out from citrine.
According to several biblical scholars, citrine was the tenth of the twelve stones that graced the breastplate of Aaron. In the Latin and Roman Catholic versions of the Old Testament, the stone was referred by the name chrysolitus (Greek for golden stone). Queen Victoria had immense love for citrine and owing to her love, the gemstone became a prominent feature in traditional shoulder brooches and Scottish kilt pins.

During the Art Deco period, one could discern a renewed rise in popularity of the citrine gemstone. Large size citrines were set in many jewelry pieces during the period of Art Deco and between World War I and World War II. They featured in a few Hollywood movies where the stars flaunted the Art Deco citrine jewelry.

Citrine is available in the following varieties:

Citrine’s beauty lies in its ability to radiate positive energy.This golden gem, be it natural or heat treated is stunningly beautiful. They are one of the most affordable gems and with a rank of 7 out of 10 on the Moh’s scale of hardness, citrine makes an ideal choice for use in pendant, studs and drops.