Chysoprase has many names. It’s also known as chrysophrase or chrysoprasus. While it has the nicknames of “jadine” or “Australian jade,” these are misnomers, as the jewel’s chemical formula and crystal structure are very different from jade. The term “chrysoprase” itself comes from the Greek words for “gold” and “green,” referring to the rock’s often bright hues.

About Chalcedony
Chalcedony is a rock, or material made of more than one stone. When a rock is made of minerals so tiny they’re difficult to discern with a microscope, it’s classified as a cryptocrystalline. The materials which make up chalcedony, quartz and moganite, have the same chemical formula, one part silicon and two parts oxygen. While quartz has been known for thousands of years, moganite wasn’t discovered until 1984. The two stones have very different crystal structures and habits with quartz being much more symmetrical than moganite.

What distinguishes one chalcedony from another is the trace minerals and inclusions which changes the gem’s appearance. With rocks like agate or onyx, this can mean multicolored patterns. Aventurine  is a chalcedony with optical phenomena. Chrysoprase has nickel impurities which provides its greens.

Physical Properties
Chrysoprase is a translucent to opaque jewel commonly described as apple green, though it may have darker tones. The gemstone has a Mohs hardness of 6 to 7, and a variety of fracture patterns. These may be splintery, uneven, or may be conchoidal, with a curved, stepped appearance. The rock’s specific gravity is between 2.58 and 2.64, aiding in gem identification.

When light reflects from the jewel’s surface, it can display one of several lusters. The rock may look dull, waxy, greasy, vitreous or even silky. In terms of other optical effects, lacks fluorescence as well as dispersion. The jewel’s refractive index is modest at 1.530 to 1.543. When chrysoprase is cut, considerations other than brilliance are taken into account. 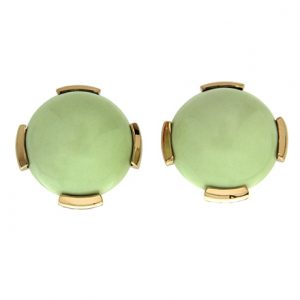 Chrysoprase is found on multiple continents, including Europe, Australia, Asia and the Americas. In the United States, the jewel is found in locations as diverse as Vermont, Oregon, Colorado and North Carolina. The gemstone is especially plentiful in Brazil, Russia, Western Australia, Poland, California and Arizona.

Bahia is the only Brazilian state which produces chrysoprase. The region is rich in minerals and is the third largest mining area in the country. While other gemstones are unearthed in Bahia, the details of how chrysoprase is extracted and which companies perform this task isn’t as detailed as with other, more in demand stones.

In Australia, chrysoprase is found in the states of Western Australia, South Australia, Queensland and New South Wales. While some mines focus on the jewel, several locations, such as Queensland’s Greenvale Nickel Mine also focus on unearthing the metal that gives chrysoprase its colors. Other chrysoprase locations are found near deposits containing opal, copper and other minerals.

Chrysoprase from Arizona is found in the Globe Hills, Miami-Inspiration, Plomosa and Weaver districts. The mine from Plomosa specialized in gathering chrysoprase, while others collected multiple types of minerals. Californian chrysoprase is plentiful, with over a dozen named deposits. While some of these mines concentrated on chrysoprase, others multitasked with asbestos, opal, agate and magnesite.

Chrysoprase and Mtorolite
Both chrysoprase and mtorolite are subsets of chalcedony known for their verdant coloring. There are many differences between the two, some of which are not apparent at first glance. One major distinction is the source of their greens. While chrysoprase is tinted through nickel, mtorolite is green from chrome. While there is some overlap to their sources, mtorolite is also found where chrysoprase isn’t present, such as Zimbabwe and Turkey.

A subtle way to tell the two apart is through their hues. Chrysoprase is more likely to be described as apple green, and display a lighter tone. Mtorolite is closer to emeralds in hue, and may appear darker. However, since color naming can be subjective and variations on shade occurs in both rocks, this is not a reliable indicator.

Chelsea filters are dichromatic optical filters used in gemology. While they were originally developed to distinguish emeralds from similar looking stones, they’re now used to examine a variety of jewels. Chrysoprase and mtorolite look very different when viewed through a Chelsea filter, with the former appearing green while the latter looks red.

Chrysoprase and Jade
Those who enjoy the look of green jade yet have a modest budget may turn to chrysoprase as a surrogate. The term “imperial” refers to a vivid green form of jadeite with even coloring. Chrysoprase is frequently a bright green similar to imperial and other popular forms of jade. The chalcedony is also available in translucent forms, mimicking another popular jade quality.

Federal Trade Commission guidelines are strict about accurate labeling for jewels. One gemstone cannot be called another. While chrysoprase may have names like “Australian jade,” honest jewelers will use terms like “chalcedony” or “chrysoprase” to avoid confusing their clients.

For people who aren’t sure if an opaque green gem is chrysoprase or jade, there are many ways to tell them apart. One way is through their specific gravity. While chrysoprase is between 2.59 and 2.61, nephrite jade is slightly heftier at 2.95, and jadeite jade ranges from 3.24 to 3.43. Their refractive indexes are also distinct, with chrysoprase at 1.530 to 1.543, and both jades measuring over 1.6.