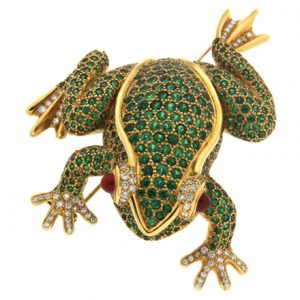 A subset of grossular garnets, tsavorites are noted for their vibrant green. During a 1967 trip to Tanzania, Dr. Campbell R. Bridges encountered the stone. Further exploration revealed deposits of the jewel extending into Tsavo National Park in nearby Kenya. After naming the gemstone, Tiffany and Company started promoting tsavorites in 1974.  Tsavorite gets its bold green through the aid of chromium or vanadium mixed into the crystal. The larger the tsavorite, the rarer and more valuable the stone. When gem cutters work with the rough, they aim to preserve as much carat weight as possible.

While grossular garnets were catalogued in 1803, tsavorites weren’t discovered until 1967, when Dr. Campbell Bridges went prospecting along the Tsavo region bordering Tanzania and Kenya. In 1971 he received a Kenyan permit to mine and export the jewels. Tsavorites remained obscure until Tiffany and Company’s 1974 ad campaign named the stone and brought tsavorites to widespread attention.

While most tsavorite rough is five carats or smaller, one tsavorite specimen weighing 925 carats was discovered in Tanzania in 2007. The resulting faceted jewel measures 325.14 carats, with an oval shape and mixed brilliant and step cuts. Faceted stones over two carats remain quite rare. Even with modest carat size, bright and heavily saturated tsavorites are prized by connoisseurs.