Tourmaline is a boron silicate mineral best known for its rainbow of colors. The jewel was first discovered in Sri Lanka, which is reflected in the name. “Tourmaline” was originally “turmali,” or “mixed gem” in Sinhalese. The variety of colors tourmaline has to offer once lead to confusion, with green stones being mistaken for emeralds, red for rubies, and so forth.

In the 1800s, when it was identified as a distinct mineral species, people enjoyed the gemstone in its own right. Chinese Dowager Empress Cixi adored pink and red tourmaline, importing great quantities of the jewel to be set into jewelry and carved into objects d’art. Scientists in the meantime were fascinated by the magnetic and electrical properties of the stone. 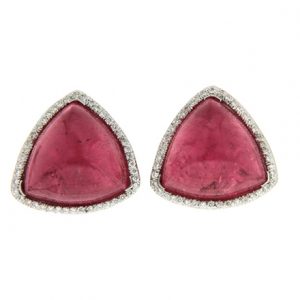 Tourmaline gemstones are made of many chemical formulas. Elbaites, which make up most jewel quality tourmalines, include sodium, lithium, and aluminum. Liddicoatite has aluminum, calcium and lithium and is known for its kaleidoscopic coloring. Uvite and dravite have sodium and calcium, or sodium and magnesium, respectively, and are both found in limestone. Schorl is black and filled with iron.

What tourmaline species have in common include their crystal, with a trigonal system and a habit which forms long columnar rough. Their sides feature striations and their tops are triangular. They have a glassy luster, a Mohs hardness between 7 and 7.5 and a white streak when dragged across unglazed porcelain. Tourmaline has double refraction, reflecting light in two directions instead of one. Some specimens have thin tubular hollows within their crystal, creating a cat’s eye effect.

Tourmalines are piezoelectric, developing an electric charge when subject to mechanical stress such as squeezing or rubbing. When stimulated, the gemstone is capable of attracting dust and ash. Tourmaline is also pyroelectric, gaining a temporary voltage when subject to heat. This earned them the nickname “Ceylonese magnets.”

In terms of magnetism, schorl and tsilaisite are especially powerful, due to their respective high iron and manganese contents. Gem quality elbaites have different levels of magnetism, depending on their color and trace minerals. Blue elbaites tinted with iron, for example, are more potent than blue gems colored with copper.

Sources
Gem quality tourmaline is found on many continents, including North and South America, Africa and Asia. Of these locations, Brazil is especially rich in tourmaline deposits. The state of Minas Gerais has hundreds of tourmaline mines, producing stones of many colors and sizes. Many rough specimens are measured by the kilo.

Tourmaline deposits have been found on opposite ends of the United States. The gemstone was discovered in Maine around the 1820s, and first documented in San Diego County, California in 1890. Until the 1910s, Maine and California were the world’s biggest producers of tourmaline, an honor that currently belongs to Brazil.

Red and pink tourmaline deposits were discovered in Nigeria in 1999. For a time, the market was filled with Nigerian gemstones, making red tourmalines more affordable. Mozambique provides pink and bright blue gems, the latter of which competes with some of Brazil’s supply. Zambia provides red, yellow and colorless, while Kenya and Tanzania provide saturated green chrome tourmalines.

Colors
While tourmaline is available in nearly every hue, some are in more demand than others. Rubellite is the trade name for pink to red tourmalines, though some jewelers reserve the name for intense red or purplish red stones. No matter what they’re called, most red and pink tourmaline receive their hues from manganese, though some are tinted from titanium or natural radiation.

Blue tourmaline is most often colored with traces of iron. It may be marketed under the trade name of indicolite. Indicolite is not to be confused with copper rich Paraiba tourmaline, a neon tourmaline available in blue as well as green and purple. The former has a longer history and is more easily found, while the latter was discovered in 1989 and is among the rarest of tourmalines.

Like its blue relatives, most green tourmaline is colored with iron. It’s sometimes referred to as verdelite, though the name is falling out of favor. One type of stone is simply known as chrome tourmaline, after the mineral once believed to be its coloring agent. The name persisted even after gemologists found vanadium was the chief source of their greens. Chrome tourmaline maintains vivid hues comparable to emeralds, even in the smallest of cuts.

Some of the most celebrated types of tourmaline don’t have a single color. Parti-colored tourmaline contains two or more hues in the same stone, a sign of changes in its environment and trace minerals during its formation. Liddicoatite can have complex color zoning, featuring fine stripes and concentric bands of hue. Watermelon tourmaline, or pink stones with green edges, are also well known.

Tourmaline Quality
Color is a major factor in judging tourmaline. Some hues, like red or bright blue, are in high demand. No matter what hue you have in mind, tourmaline with vivid saturation and medium tone are strongly prized. Gem cutters will try to shape the rough in order to bring out the desirable shades. With parti-colored gemstones, they should be cut in a way that shows their zooming to best advantage.

As tourmalines form in liquid rich environments, the finished jewels may contain tiny pockets of liquid. Gas bubbles may also occur inside the stone. These clarity characteristics are usually visible only under magnification. There are times where hollow tubes form within the stone, sitting parallel to one another. Such formations can create a cat’s eye effect.

Tourmaline rough tends to be columnar. They are usually cut to echo their original shape, forming slim rectangular faceted stones. Larger gem quality tourmalines are rare. The bigger the finished gem, the higher the value, especially for stones over five carats. When fashioning tourmalines, gem cutters are careful to preserve carat weight.

Watch a podcast produced by GIA about Beautiful Tourmalines