Topaz is a silicate gemstone with aluminum and fluorine in its chemical formula. In its purest state, the jewel is completely colorless. Topaz’s pinks, reds and purples are due to trace elements of chromium, while blue is often the result of irradiation. Brown and yellow appear when there are irregularities in the crystal’s atomic structure.

With a Mohs hardness of 8, topaz is resistant to scratches. The stone is vitreous, meaning that it has the luster of glass. Topaz takes polish so well that finished gemstones may feel slippery to the touch.
The gemstone is transparent, with little to no clarity characteristics visible to the naked eye. This clarity makes it well suited for faceted cuts.

Carats are the standard unit of measurement for weighing gemstones. One carat is equal to 20 milligrams, or one fifth of a gram. Topaz rough can be massive, necessitating measuring pieces by the kilo. Between the size of the rough and its columnar natural shape, its often formed into elongated cuts like pears, oval and emerald cuts. 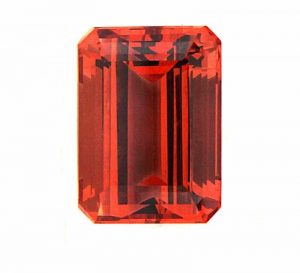 Topaz was traditionally known as a yellow gemstone. Advances in science and mineral classification gradually revealed that many jewels can be yellow, and that topaz has a specific chemical formula. Trace minerals, color centers and other variations in the jewel’s birth impact its color. Of these, some circumstances are rarer than others, leading to coveted hues.

Imperial topaz was first discovered in Russia’s Ural Mountains in the 1800s. The gemstone was named in honor of the czar, and for a time, only royalty was allowed to wear it. While imperial topaz remains a sought after gemstone today, there are differing opinions as to what it looks like. Some connoisseurs believe that the jewel is more pink, while others feel it has a more dominant red or orange hue. Most jewelers use the term to describe orange-red stones.

Topaz Sources
Topaz is usually found among granite or rhyolite rocks. Topaz forms in pegmatites, which occur in the presence of volcanic activity. Underground veins fill with magma or vapor. Topaz may also form in vapor cavities caused by lava flows. The material cools at a very gradual rate, allowing the formation of a few large crystals rather than many small ones.

The jewel is mined in many locations, including the United States, Brazil, Pakistan, Russia, Sri Lanka and Madagascar. In the US, it’s found in Colorado, Montana, Utah and California. The state of Utah has a special interest in the gemstone, naming a mountain in its honor. In 1969, the state declared topaz to be its official jewel.

Brazil’s Ouro Preto region has a long history of mining gold and precious stones. Today it is known among other things as providing quality imperial topaz, as well as rare pinkish purple and red jewels. These make up about 1-2% of the gemstones found in the mines, and they tend to be small compared to other topaz rough, measuring up to 20 centimeters long.

Pakistan is another country that provides hard to find topaz. Its Ghundao Hill area provides topaz called cyclamen pink, after the pinkish-purple flower. Stones from this area take polish well and have an attractive shine. Other countries like Sri Lanka, Namibia and Madagascar also provide topaz, usually of more common colors. 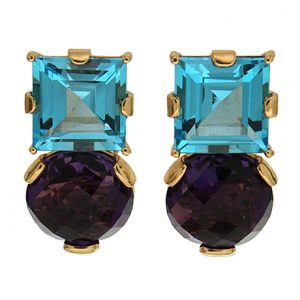 When buying topaz, try to look for a gemstone that is eye clean, or has no clarity characteristics visible to the naked eye. Most topaz available have high levels of clarity, especially blue, yellow or colorless versions. Due to the generous size of topaz rough, common forms of the jewel can remain affordable, even at higher carat weights.

Some topaz colors are more plentiful than others. Blue, brown and yellow topaz are widely available. Pink and reddish topaz are much rarer, with the more crimson shades being less common and having higher values. For most stones, it’s important to check for even coloration. In the case of bicolor topaz, both hues should be clearly displayed, such as a stripe down the center of the stone or two halves of the gem showing different colors.

Topaz may be faceted in a variety of shapes, such as round, square or heart. They are most often cut into elongated shapes like emerald or marquise cuts, echoing the columnar form of the rough. Some gem cutters may take advantage of topaz’s size and affordability to experiment with faceting technique. These may include free form fantasy cuts with asymmetrical outlines and inverted facets, topaz cut to resemble flowers or carved cameos.

No matter which topaz you choose, it’s best to keep your jewel safe. While topaz is hard, its cleavage makes it vulnerable to damage if bumped. Topaz that is placed in a pendant, earrings, or similar pieces are less prone to impacts. Stones that are in rings or bracelets should have secure mounts that protect its edges, like a bezel set. Keeping your jewel away from excessive heat or bright lights is also recommended.

Named Topaz
While topaz rough can be enormous, it’s often cut into small pieces for faceting for ease of wear. The American Golden Topaz is one of the world’s largest cut gemstones, and the largest faceted yellow topaz. Its rough originated from Minas Gerais, Brazil, weighing 11.8 kilograms. Unlike other topaz rough, which resemble rectangular columns, the American Golden Topaz was rounded, shaped by steam over countless years.

The topaz was cut in the late 1980s, a process which took two years to complete. The result was a cushion cut gemstone with 172 facets. Most of the rough was sacrificed in shaping the stone, which now weighs 4.6 kilos, or 22,892.5 carats. The American Golden Topaz isn’t eye clean, but features negative spaces left by albite crystals on its pavilion. The jewel currently resides in the Smithsonian Institute’s National Museum of Natural History.

Another topaz of note is the Imperial Flame. According to its current owners, the Kreiss family of Sonja Kreis Unique Jewelry, they bought the 615 carat imperial topaz rough in Brazil. The gemstone was cut in house, a process that took eight days and many breaks to examine the stone. While topaz is a hard jewel, it must be faceted with care in order to void accidental damage.

The finished gemstone measures 89.53 by 20.56 by 19.15 millimeters and weighs 332.24 carats. It’s a free form fantasy cut, with grooved facets which highlight the jewel’s eye clean clarity and color. The Imperial Flame is bicolored, with one end a rare red hue which gradates into an orange.