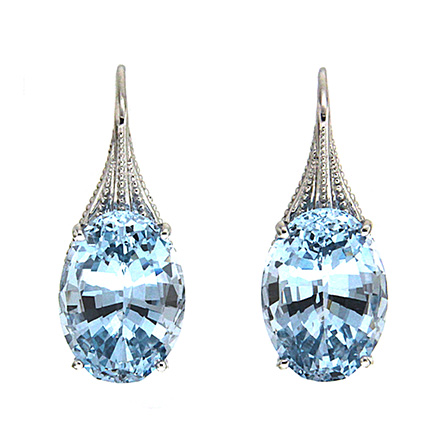 The chameleon of jewels, spinel was often mistaken for rubies and other precious stones. It wasn’t until 1783 that scientist Jean Baptiste Louis Rome de Lisle identified spinel as having a distinct chemical makeup distinct from corundum, beryl and other gemstone families. The spinel group is made of one part magnesium, two parts aluminum and four parts oxygen. It’s molecular structure is to a diamond in that both have a crystal structure resembling two four sided pyramids joined at the base, with roughs are shaped like an eight sided die.

Spinel has a variety of hues, including blue, purple, orange and red. Chromium tints spinel red, iron turns the stone blue, and a mixture of both elements create orange and purple. Bright, well saturated shades tend to be more popular among connoisseurs than more delicate tones. It’s not unusual to find red or dark pink spinels weighting dozens or hundreds of carats among a collection of crown jewels.