“Heavenly Gem” – Sapphires are a jewel variety of the mineral corundum, often containing trace elements that provide memorable colors. The most valuable sapphires are an intense royal blue lacking gray and green overtones and maintains its hue under all types of lighting. However, sapphires are available in every color of the rainbow, including white. When a sapphire is a shade other than blue it is referred to as a fancy sapphire. 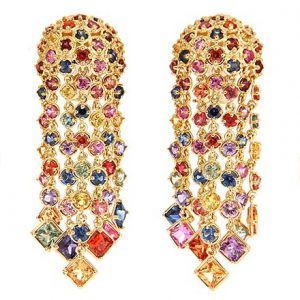 Throughout the ages, sapphires symbolized virtues such as faithfulness, sincerity and loyalty, making this jewel popular with nobles and the clergy. For the devout, sapphires had an extra layer of meaning, with its blue shades representing heaven.

Sapphires were long beloved by royalty and clergy. Wearing sapphire necklaces and pendants were believed to prevent harm, particularly from poisons, useful traits for those in positions of power. Sapphires also gave the wearer resistance from trickery, deflect jealousy and change color depending on the virtue of the one wearing it.

The blue of sapphires was believed to symbolize heaven, making the jewel a popular choice for ecclesiastical rings. To wear a sapphire was to draw divine favor to oneself. A 1565 book called “De XII gemmis” states that the Ten Commandments were originally written on sapphire tablets, further demonstrating the stone’s connection with the sacred. Sapphires were connected to the heavens in a more literal sense, associated with the Taurus zodiac constellation. People born under Taurus who wore sapphires kept a clear mind.

In Medieval Europe, sapphires were used to treat afflictions of the eye. Not only could the jewel alleviate disease, it purified the eyes and were able to remove offending debris. A sapphire gifted to London’s Old Saint Paul’s cathedral was believed to be especially potent for healing eyes. Deep blue sapphires were also used to alleviate skin infections. Slowly rubbing a sapphire around the afflicted skin would gradually draw out the disease and bring the wearer back to health.

Sapphires are jewel quality members of the corundum family that come in every hue other than red. Its most famous color is blue, the ideal shades being medium to medium dark, with vivid saturation. Pure blue or violet shades are preferred over other tints. Sapphire rough rarely has uniform coloring, featuring bands of darker or lighter blue in its crystal. Whenever possible, stone cutters try to cut the rough in a way that brings out the desired tones.

The Blue Belle of Asia, a cushion cut sapphire weighing 392.52 carats, became the world’s most expensive sapphire on November 11, 2014. The jewel was mined in Ceylon in 1926 and eventually sold in 1937 to a British magnate. For decades the sapphire had disappeared from the public eye, though it was examined in the 1970s by gem dealer Theodore Horovitz. In addition to size, the Blue Belle of Asia has unusual clarity, glows with a deep peacock blue and has never been heated. All of these factors led to a projected sale of $7 to $10 million dollars. The Blue Belle of Asia sold for over $17.5 million.

Non blue sapphires are known as “fancy.” Yellow, green and pink are common variations, though other hues such as brown, violet and colorless also exist. The rarest fancy sapphire is the orange-pink padparadscha, whose color is likened to a lotus flower. Like their blue relative, fancy sapphires are cut to bring out their best coloring, which often includes a deep pavilion to increase saturation.