“Fiery Red Gem” – This member of the corundum family and sister to the sapphire only comes in one color. However, its crimson hues vary from bluish and purplish to orangey red in tones both medium and dark. The most valuable are the pure red with no overtones of brown or blue. 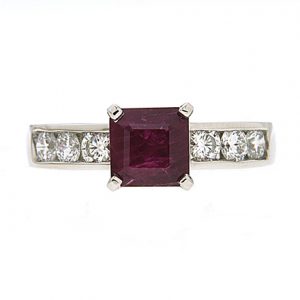 Rubies have inspired folklore for centuries, and continue to do so now. One of the most iconic legends of this jewel appeared around 1939, when the producers of MGM’s The Wizard of Oz transformed the heroine’s slippers from silver to ruby to stand out in the Technicolor film. This imagery captured the popular imagination so thoroughly that 50 years later, the company Harry Winston created a pair of shoes encrusted with real rubies, totaling 1500 carats.

Rubies have long been considered a superior jewel. Its name in Sanskrit, “ratnaraj,” means “king of gemstones.” Among the many virtues of rubies is the belief that a perfect specimen would provide complete safety for its owner. The owner could live peacefully among enemies, be invulnerable to harm and be protected from bad luck. With a beautiful ruby, even the wearer’s crops would be safe.

One of the more famous examples of ruby’s protective abilities comes from Burma. Warriors believed that wearing rubies wasn’t enough to unlock the jewel’s full power. In order to be invincible, they needed to become one with the stone. Before battle, they would slip pieces of ruby beneath their skin. Thus equipped, no weapon could harm them.

Ruby’s intense red was once attributed to fire trapped within the stone. No amount of cloth wrapped around the jewel could suppress its brightness. To drop a ruby into a vessel of water would cause the liquid to boil. Rubies were also associated with blood, making it the stone of choice for treating inflammation and hemorrhages. The stone also alleviated heart ailments, reenergize a person and sharpen memory. To bring out the best in a ruby’s healing properties, people wore them on their index fingers.

Rubies are jewel quality members of the corundum family, famed for their intense red. Lighter stones may be classified as pink sapphire, though countries have different standards on where a sapphire ends and a ruby begins. What is agreed upon is that the best hues are pure red, with heavy saturation and no overtones of brown or blue. The most coveted rubies are found imbedded in marble. While rubies may also be found in basalt, marble has fewer of the iron impurities that may darken the jewel.

Locations most famous for their rubies is Myanmar, Vietnam and the Himalayas. While some may believe that provenance is an indicator of quality, many factors tie into a ruby’s beauty. No matter where a ruby is mined, it should be eye clean, or contain inclusions that enhance its appearance. Examples include rutile that helps scatter light into an otherwise dark stone, or create a star inside the jewel. A ruby’s cut should bring out the best in the stone, and prevent light from leaking out of its sides.

The Sunrise Ruby made headlines in May 2015 after its auction at Sotheby’s. The 25.6 carat ruby is a coveted “pigeon blood” red, named in honor of “Sunrise” written by the poet Rumi. Though the jewel was estimated to be worth $12-$18 million, it sold for $30 million, giving it the record of the world’s most valuable colored gemstone.