“Spiritual Crystal” – Quartz is one of the most popular gemstones on earth. In ancient times it was used to make crystal carvings, balls and bowls. Today it is often used in jewelry, particularly in carved pieces. The pale pink quartz, which ranges from transparent to translucent, is known as rose quartz. 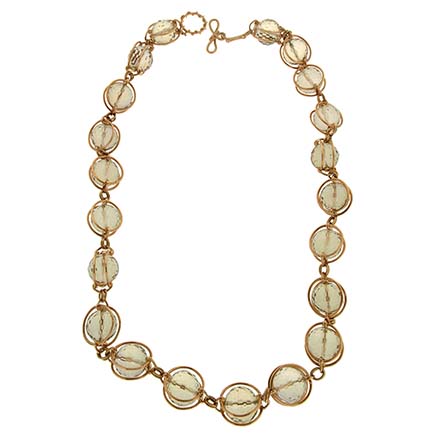 There is a wide variety of quartz available, many of which are used as gemstones. Depending on the trace elements, inclusions and growing conditions, one from of quartz may be greatly different from another.  Quartz is one of the more plentiful minerals on earth, with a wide number of variations. It is cloudy and clear, dark and bright, capable of a cat’s eye effect, and comes in a rainbow of colors. There is only one place in the world however, that produces the bi-colored type known as ametrine.

The Anahi mine in Bolivia unearths amethyst, citrine, and their fusion, ametrine. An ideal piece of ametrine has strong violet hues along with deep orange shades. The larger carats are more likely to be saturated than smaller ones. The color patterns in a crystal are like fingerprints, with no two alike. Often this stone is cut in a way to emphasize its contrasting shades. Emerald and fantasy cuts are popular for this purpose.

Rock crystals are completely colorless, they have the clarity and shimmer of water, colorless quartz crystals have also become popular due to the legend that wearing them will benefit a person’s health and spiritual well being.

Notable gemstones include amethyst, aventurine and rose quartz.  Amethyst is tinted purple with iron and has been used in jewelry and other luxury items for thousands of years. It’s found in abundance in a number of countries, with Brazil noted for mining high quality specimens.  Aventurine quartz comes in many colors, but all of them contain metallic inclusions that make the jewel shimmer with aventurescence.  Rose quartz gets is pink from a number of trace elements, including manganese. Some versions of the jewel contain rutile crystals, which may produce stars inside the stone.

The ancient Greek philosopher Theophrastus believed that quartz was a form of permanently cooled ice. This is reflected in the ancient Greek name for the mineral, kristallos. The modern name originates from the German word “quertz,” which in turn may have derived from other European languages from the word for “hard.”

Rock Crystal
A member of the quartz family, rock crystal is a colorless jewel. Pliny the Elder mentions rock crystal in his work, stating that since the stone is found in the coldest of locations, it must be formed from ice. He cites older Greek studies as confirmation of his idea. The name “crystal” comes from the Greek word for ice, “kristallos.”

One notable example of rock crystal carvings is the Lothair Crystal, dated between 855 and 869 ACE. The crystal is covered with in the late Carolingian style depicting scenes from the Bible. Little is known about its creation other than King Lothair II commissioned the piece. It currently resides in the British Museum.

In fine jewelry, rock crystal may be used as a mount for other gemstones, creating a piece where precious gems seem to float in the air. Late Victorian rock crystals were often carved in cabochon and backed with mother of pearl. Art Deco rock crystals were often set with onyx for strong black and white contrast as well as to show off the difference in lusters. Stuart Crystals, worn from 1650 to the 1700s were faceted rock crystals with large tables which were mounted on top of gold wire and other materials. Modern designers may do all these things, as well as carve rings and bracelets out of solid rock crystal.