The beautiful, shimmering, pale green peridot is associated with a history that is not just intriguing but which dates back to as early as 1500 B.C., making it one of the world’s oldest known gemstone. The tiny Egyptian, St. John’s Island (now referred to as the Egyptian Island of Zabargard) in the Red Sea was documented to be the only ancient source of the gemstone. The location remained a mystery for several centuries until it was rediscovered again in about 1905. Post 1905, the production of the gemstones reached its zenith. The gemstone has deep connections with ancient Egypt and is associated with numerous folklores, legends and healing properties. In fact, it is considered the National Gem of Egypt.

In Ancient Egypt, Peridot was deemed as a very spiritual stone. The Egyptian priests would prepare a strong beverage from crushed peridot stones which was then consumed at the time of ritual ceremonies. They believed that it helped them get closer to nature. Apparently Cleopatra too had a deep fondness for peridot. Archaeological evidence suggests that the gemstones which she used to bedeck herself with, were actually peridot and not emerald as was widely believed. Napoleon was believed to have made a gift out of peridot for Josephine to express his undying love. In Hawaii, Periodot is considered to be the tears of the Goddess Pele. In the ancient world, it was also used as a talisman for spiritual enhancement, to dispel nightmares and to ward off the evil spirits.

Peridot has several nicknames. It is often considered the ‘emerald of the evening’ and is sometimes referred to as ‘the poor man’s emerald’. The Egyptians refer to it as the ‘gem of the sun’. Not much is clearly known about the origin of the term ‘peridot’ though some claim that it came from the French word ‘peritot’ which means unclear and because of the numerous internal fractures and inclusions within peridot, the stone was thus named. There are others who claim that the term has been derived from the Greek word ‘peridona’ which implies ‘to give richness’. The word Peridot may have also come from the Greek word ‘Faridat’ which means ‘gem’. Apart from ‘Peridot’, the gemstone is also known by the names ‘Chrysolite’ an older German word for ‘goldstone’ and ‘Olivine’ since Peridot is a gemstone form of the mineral olivine. 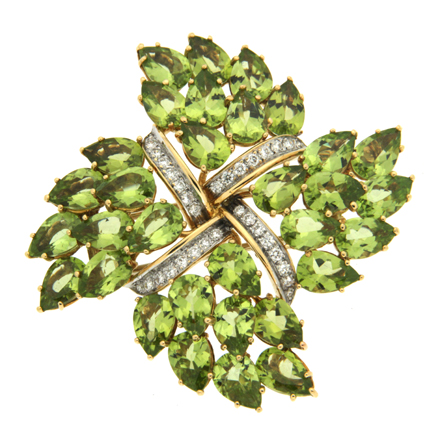 What makes peridot uniquely stunning is its fresh lime green color. Being a gem-quality variety of olivine, which belongs to the forsterite-fayalite mineral series, Peridot is an idiochromatic gem, which implies that the color is the outcome of the basic chemical composition of the mineral itself. It is for this reason that the color of Peridot is green, though the tone of green may vary from being light yellowish to dark brownish-green. In other words, the intensity of the color depends on the amount of iron present in its composition. And because of its variation in color, the stone was confused with emerald countless times throughout history. It is not as hard as the diamond and is only 6.5 to 7 on the Mohs scale. But it is fairly robust and easy to maintain.

Peridot’s properties lends itself well to a variety of cuts, from cabochon, fantasy cuts and everything in between. In many instances, the jewel is cut in a way that highlights its color. Depending on the designer and the mount, peridots may be cut into round brilliants, cushion, checkerboard, step, pear and many others. The jewel’s color and reflected light should be of uniform quality.

Peridot is today widely considered the traditional birthstone of August. Peridot is also connected with the Libra zodiac sign, which runs from September 22nd to October 23. People born under Libra can use the jewel to free themselves from evil spells. In addition to a fascinating history, the gemstone also boasts of having great healing properties. Apart from protecting the wearer against evil spirits and negativities of life, the stone apparently has a great relaxing and stress reduction properties. It can also be used to treat asthma. The wearer attains peace of mind and is protected against nightmares. It also brings good luck and is known to alleviate fear and anger and emotional suffering. As a whole body tonic, Peridot is known to be blessed with healing properties for the lungs, eyes, stomach and heart.

Today’s finest quality Peridot comes from Mogok in Burma and from the border areas between Pakistan and Afghanistan. It is also found abundantly in China, Myanmar, USA, Australia and Africa.