“Explosion of Color” – Opals originated millions of years ago in silica rich deserts. During heavy rainfalls, water blended with silica, and the resulting solution would sink into fissures in rocks below the earth’s surface, giving birth to a memorable jewel. Opal is one of the few gemstones sedimentary in origin and contains up to 20% water from ancient times. The play-of-color seen in opals is created through diffraction and is dependent upon the alignment and size of their silica spheres.

The kaleidoscopic abilities seen in an opal varies due to the transparency of the stone and the body color, which determines the variety and value of the stone. There are several types of opals in existence, black opal being the most valuable due to its brilliant hues. Crystal opal is the next most valuable type. It is transparent with flashes of prismatic tones visible in many layers of the stone. White, milky opals are the most affordable type and tend to display more diffused shades. A more unusual type of opal is the Yowah nut, or boulder opal, with an ironstone host rock matrix which creates a natural dark background to view its fiery colors.

Opals are made of tiny countless spheres, piled one on top the other. Each microscopic ball acts as a prism, bending light into a wealth of rainbows. The iridescent hues that scatter across an opal’s surface is known as play-of-color. This phenomenon occurs both when an opal is still, and when it’s turned to catch the light.  Play-of-color happens on a variety of opals, regardless of the body color, though black is favored by connoisseurs. Ideal play-of-color contains large equal sized patches of colors, with few if any blank spots. The hues should be bright and saturated, preferably with plenty of red. Color shouldn’t be static, but change from one hue to another as the jewel turns. 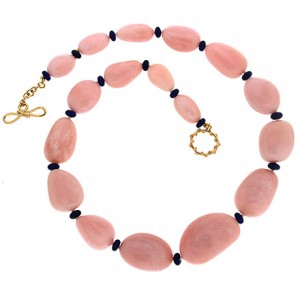 Opals were believed to be one of the most powerful colored stones, as it had the hue of every other jewel united in a single crystal. In this sense, opal is a gemstone with the ability to multitask, providing every mystical and health benefit of other jewels. Its multicolored nature lead Pliny the Elder to declare opals as having the best traits of all gems.

In Medieval Europe, were believed to be effective in treating ailments of the eye. In Elizabethan England, “opal” was thought to derive from “opthalmos,” meaning eye. This supposed word origin further cemented their belief in the jewel’s benefits regarding vision, as well as protection against the Evil Eye and other optical benefits. Stories also abounded of opal’s ability to turn its wearer invisible.

Opals received a blot on their reputation on 1829, when Sir Walter Scott published Anne of Geierstein. A character known as Lady Hermione always wore a bright enchanted opal in her hair. It mirrored her moods, sparkling when she was happy and flashing red when she was cross. When the opal was sprinkled with holy water, the jewel lost its brightness and Hermione lost consciousness. By the next day the lady was nothing more than a pile of ashes. Later commentators believe that Sir Walter Scott didn’t have a grudge against opals, and might have chosen the jewel at random.

As the birthstone of October, some compare the prism of opals to autumn leaves and the contrast of the last days of summer with traces of winter. Gemologist George Kunz believed that opals weren’t suitable for October, possibly because he felt that brighter jewels needed to counteract the chill of cooler months. Despite this idea, he named fire opal as a jewel linked to summer.

The medieval academic Albertus Magnus wrote of a jewel set into the Holy Roman Emperor’s crown he called “orphanus.” According to him, this stone had a white body color and shone with flecks of red bright enough to be seen in the dark. He said this stone had the ability to protect honor. Later scholars believe that Albertus Magnus was describing an opal.

Opals have long been admired for their multicolored nature. Ancient scholars believed that the rainbow nature of the stone gave it the traits of all other gemstones. Opals also had their own unique abilities, treating eye ailments and making its wearer invisible. Though an early 19th century book tarnished the jewel’s reputation, opal remain a beloved birthstone of October.