“Twist of Fate” – The name Onyx comes from the Greek word onux, which means fingernail or claw. According to legend, one day Cupid cut the divine fingernails of Venus with an arrowhead while she was sleeping. He left the clippings scattered on the sand and the fates turned them into stone so that no part of the heavenly body would ever perish.  To the Greeks, all forms of chalcedony were onyx, though the Romans used the term for black and brown specimens. 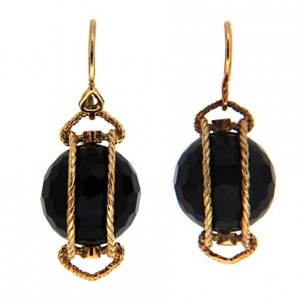 Onyx is a type of chalcedony, which is in turn made from moganite and quartz. It’s a cousin of bloodstone and closely related to agate. Onyx can be distinguished from the former by its layers, and the latter by its pattern of bands. While agate sports curved streaks, onyx has parallel stripes. Onyx is most famous for its black hues, but comes in many colors, including white and red.  Onyx has a fine texture that makes it ideal for carving. It is often used in fine jewelry to create a sharp contrast in shade between the foreground and background.

Onyx was popular among the ancient Greeks and Romans for other reasons. Its parallel colors make it ideal for intaglio, relief and other hardstone carvings. The contrast between black and white helps make striking imagery and to define the foreground pictures. Onyx carvings date as far back as the 3rd century BCE.

While black onyx is the most iconic version of the jewel, it has a red form known as sardonyx. The name is a portmanteau of onyx and sard, a reddish brown chalcedony similar to carnelian. As sardonyx, the jewel sometimes acts as a co-birthstone of August alongside peridot.

Despite the connections with a goddess of love, onyx was considered risky for romantic couples, as wearing it around the neck cooled one’s ardor. Onyx was also thought to make relationships difficult, causing a couple to separate. People who wished to avoid falling in love or letting their eyes wander would wear onyx as a preventative.

Other mystical qualities include what happens when an onyx has a camel’s head or a pair of goats as well as myrtle carved upon it. A person who has such a specially charged onyx gains power control over demons, though may be prone to nightmares. Onyxes in their natural state were also thought to cause bad dreams, indecision and disputes to those who wore or even owned one. Still more people felt that keeping an onyx at home caused its owner to lose energy.

Though onyx had a bad reputation with some, it offered benefits. Onyx is associated with the Leo zodiac and other star signs. A 1913 rhyming triplet posits that Leo is a difficult sign to be born under, causing its people to be lonely and unlucky. Leo children who possess an onyx will flourish into adulthood, bolstered and protected by their stones. Those interested in the astrology of Saturn are advised to wear a specialized onyx ring on Saturdays, one with Janus’s faces carved upon it while Saturn rises.

Onyx is a colorful stone with a colorful background. It was believed to have come from a goddess of beauty and love. Despite this illustrious beginning, onyx was considered by some to be suboptimal to own, especially for those in love. It was still regarded as powerful, though not always beneficial. One notable exception is for people born under the sign of Leo. For them, onyxes serve as a talisman for luck and protection.