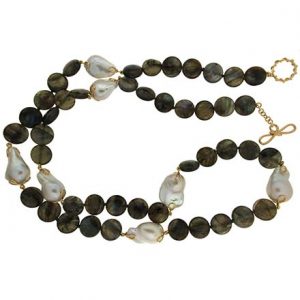 This member of the feldspar family is named for place where it was discovered, Labrador, Canada. Samples have since been found in Finland, Madagascar, Australia, Paraguay, India and other countries. Labradorite has a Mohs hardness of 7, similar to quartz, and has a glassy sheen. The stone is usually translucent or transparent, and has a body color of grey, white, blue or green.
Labradorite is most famed for the way it reacts to light, known as labradorescence. Due to the way microscopic planes within the crystal face uniform directions, labradorite is capable of reflecting iridescent light in shades of blue, green, yellow and sometimes red. The gemstone displays this phenomena whether it is given a brilliant cut, a cabochon, carved into fanciful shapes, or left rough.