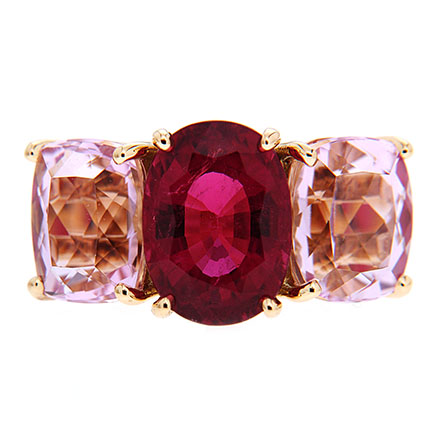 Spudomene is a lithium aluminum silicate largely used for industrial purposes. When the crystal contains traces of maganese, it becomes kunzite, a jewel celebrated for its soft pink and violet hues. Kunzite was discovered in San Diego country in Califonia, and is now mined in Brazil, Sweden, Australia, Pakistan and other countries.

In 1902 mineralogist George Frederick Kunz declared that this unusual pink stone was a previously unknown member of the spudomene family.  A year later, a professor from the University of North Carolina named the stone in honor of Kunz. The jewel is often given step cuts, highlighting the stone’s clear interiors. Its colors are often concentrated at the bottom of the rough stone, making this area an ideal place to cut.