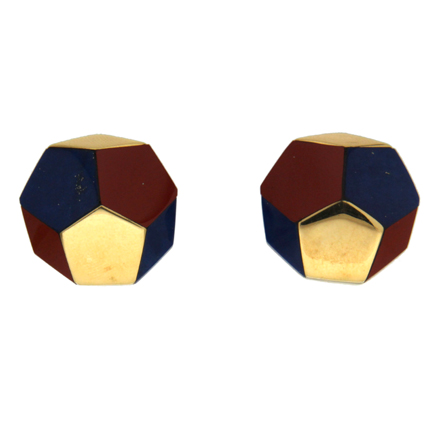 Jasper is a rock primarily made of chalcedony and other silica based minerals. Like the jewel, the name has an aggregation of origins, including Old French, Latin and Greek meaning “speckled stone.” Jasper may be banded like other chalcedony, though it’s also known for irregular streaks and spotted patterns which are displayed via carvings, cross sections and cabochons. Up to 20% of its mineral may be from inclusions, leading to its diverse appearance.

As a gemstone, jasper with deep hues or interesting designs are greatly valued. Names for pattern variations are often whimsical, such as leopard skin, Picasso or landscape. Though the stone is slightly translucent, it’s rarely faceted. More often jasper is cut into cabochon or carved into beads, gemstones, cameos and seals.

Jasper may be opaque or translucent, though it’s usually cut like an opaque jewel due its limited ability to reflect light. It comes in many colors, including white, black, grey, brown, yellow and most notably red. This final color comes from iron oxide, the form of jasper which commonly appears as crimson flecks on bloodstone. On rare occasions, jasper the stone gets blue body color.

Jasper has been enjoyed as far back as 1800 BCE, a date comes from an archaeological find of Minoan artifacts which revealed jasper seals. The jewel has also been used for beads, religious jewelry and even a type of medicine. Medieval lore stated that jasper had the power to attract poison, making it an ideal stone for treating snakebites. A 14th century Italian book further states that jasper carved with a dog or hunter could repel evil influences.