“The Protector” – The name garnet is most likely derived from the word pomegranate. Garnets are usually thought of as dark wine-colored gemstones though they are actually available in a broad range of colors, including autumn orange, fire red, spring green and flower petal pink. Some garnets even change color in different lightings, or display cat’s eye or star effects.
In ancient Asia and the American Southwest, garnets were used as bullets because their glowing red color was believed to increase the ferocity of a wound. Garnets have long been carried by travelers to protect them against accidents while they are far from home, and according to legend, light up at night to protect their owners from nightmares. 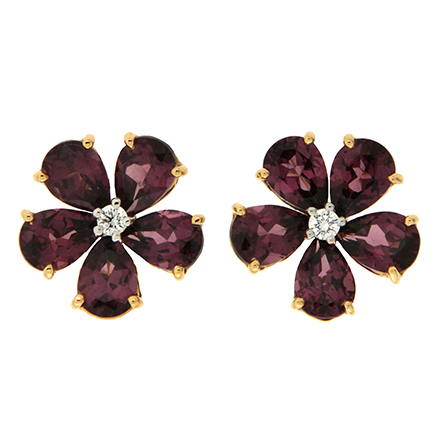 Mineralogist George Kunz believed some forms of garnet were mistaken for amethyst, and similarly used to prevent intoxication. He believed that as with amethysts, ancient Greeks carved drinking vessels from purple or reddish garnets. Any water poured into these cups would take on the color of wine and could be consumed with little risk of drunkenness.

A thirteenth century book called “The Book of Wings” outlines how to make amulets from gemstones. When a lion was carved upon a garnet, the stone brought and preserved honor for its wearer. Garnet lion also served as protection from disease and ensures safety when traveling. When combined with chalcedony, garnets helped to keep sailors from drowning.  Under the name “carbuncle,” red garnets were believed to stimulate the heart, treat inflammation and hemorrhaging and create a calming influence. Other lore stated that these garnets increased anger and other strong emotion, making it a jewel to be worn sparingly. The physician Paracelsus called carbuncles “golden stones,” which to him made them ideal for treating heart ailments.

Garnets have a strong and at times contradictory role with calendar signs and the stars. While carbuncles were linked with Mars and Venus, garnets were associated with the sun. Garnets are also connected with Aquarius and Scorpio, depending on the tradition. Neither zodiac sign overlaps with January, garnet’s birth stone month.  One carbuncle made a memorable appearance in detective literature. One late December, Sherlock Holmes discovers a roasted goose with a priceless blue garnet in its crop. While the carbuncle’s owner is quickly found, Holmes investigates how the jewel traveled from a hotel room to the inside of a farm bird. The story of the blue carbuncle has been replicated countless times on TV and other media.

Garnets have been admired for countless ages. Its red version, also known as a carbuncle, has been given many special properties, ranging from protection, good health and sobriety. When combined with other gemstones or certain imagery, garnets became especially potent. Other colors, such as blue and purple, are also acknowledged in lore.

Demantoid – A type of andratite garnet, demantoids are noted for their bright green. They bear a superficial resemblance to tsavorite garnets, though their chemical structure differs. Of the andratite stones, demantoids are the most likely to be mounted as jewelry.  Demantoid garnets were discovered in 1868 in the Ural Mountains in Russia. The garnets are named after diamonds, for both of them have a similar brilliance and luster. Deposits have since been found in Namibia, Madagascar, Italy, Afganistan and Iran. Jeweler Peter Carl Faberge helped popularize the stone for a time, by using them in his designs.  Demantoids typically have inclusions visible to the naked eye called horsetails. They’re considered a desirable feature, leading gem cutters to orient horsetails into the center of a stone to best show off their beauty.

Pyrope – Though deep red garnets have been adored since the time of ancient Egypt, pyrope was specifically discovered in 1803 in the Czech Republic. It’s the only garnet type that’s consistently red in its natural state. Pyrope’s chemical composition is more closely related to almandine and spessartine than other garnet types. Careful observation and testing may be needed to tell pyrope and almandine samples apart.  Pyrope’s crimson ranges from purplish to nearly black. A few specimens rich in chrome may turn green when heated. This garnet is typically eye clean, with few clarity characteristics visible to the naked eye. Pyrope is available in a variety of carat sizes and well

Almandine – This close relative of pyrope garnet runs through a broad spectrum of reds. Almandine’s hues may be orange-red, purple-red, lightly saturated or more often dark. It’s less likely to be eye clean that other red garnets, though it’s frequently eye clean.  Almandine gets its name via Pliny the Elder, who attributed the stone with the town of Albanda in Asia Minor. Over the centuries, deposits have been found on every continent. Gemstone quality almandine is abundant in Sri Lanka, nothern Australia and Alaska. Large rough is common, making almandine affordable in a range of carat weights.

Spessartine – Spessartine garnets are named after the Spessart mountain range in Germany, where they were first discovered. Like its cousins pyrope and almandine, it has reddish or orange hues, though the color may vary by region. Parts of the United States are known for producing purple-red varieties, while Madagascar yields many orange tinted stones.  Spessartine exists on every continent and is usually found in granite or related rocks. As a jewel, it’s prone to having clarity characteristics visible to the naked eye, which may be disguised or enhanced with careful cutting. Between spessartine’s vibrant and often well saturated colors and availability in carat sizes small and massive, it’s an excellent choice for gem cutters who wish to experiment with free form cuts.

Grossular – Grossular garnets are named after the botanical term for gooseberries. The geologist who discovered this variety, Abraham Gottlieb Werner, had specimens that reminded him of the fruit. Grossulars are part of the ugrandite group of garnets, which all have calcium in their chemical formulas. In it’s natural state, it’s found embedded among limestone.  Grossular garnets are available in a rainbow of colors, including brown, orange, red, yellow and green. They are commonly transparent, making them well suited to faceted cuts as well as carvings. As a jewel, connoisseurs favor its bright green variations for their beauty and rarity.

Uvarovite – Discovered in 1832, uvarovite was named by a Saint Petersburg Technological Institute professor after an education minister of the time, Sergey Uvarov. This member of the garnet family is closely related to andradite and grossular garnets, as all three have chemical formulas starting with three calcium atoms. Though uvarovite found on multiple continents, it’s the among the rarest of garnets.  Uvarovites are consistently green, due to the chromium that is an integral part of its chemical formula. Shading may range from green-black to a vibrant emerald. The garnets are usually transparent or translucent, and too small to facet. To get around this issue, some jewelers mount a cluster of uvarovites instead of a single jewel.

Andratite – First recorded in 1868, andratites are a calcium bearing garnet. The gemstone gets its name from the Brazilian naturalist José Bonifácio de Andrada. Andradite is available in an array of colors, including yellow, green, red and black. Some rare editions have a iridescent gleam in which the colors lay in thin stripes. The jewel has three subtypes, melanite, topazolite, and demantoid.  Melanite, with its opaque black color, is used primarily in mourning jewelry, and topazolite is usually quite small, only sometimes large enough to be faceted. Demantoid is uncommonly bright, with a high refractive index. Andratite’s luster varies wildly, ranging from dull, to adamantine. The garnet is typically found among limestone, or alkaline or calcium bearing igneous rocks. Samples have been found on every continent.