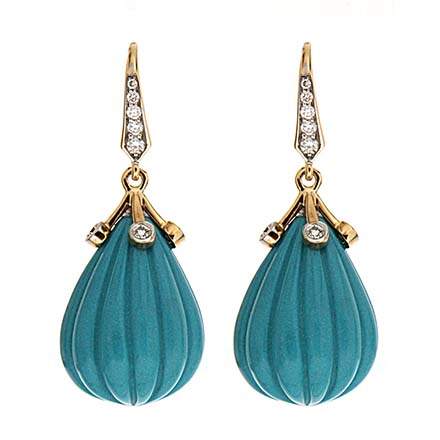 Turquoise is an opaque gemstone most famous for its blue green color. It has been beloved for thousands of years, and has been found in Egyptian tombs dating to 4,000 BCE. Despite its long history, the name “turquoise” is relatively new, dating only as far as the 16th century. At this time, the gemstone came to Europe through the country of Turkey. The French word “turques” eventually became “turquoise.”

Unlike jewels such as sapphire or emerald, turquoise’s color is inherent to its chemical formula rather than coming from traces of external elements. Turquoise’s chemical formula is complex, a hydrated phosphate with copper and aluminum. The jewel gets its blue from copper, and often has streaks of pyrite or iron oxides like limonite which add gold, brown or green coloring.

Turquoise is often cryptocrystalline, with crystals so tiny they are difficult to find even under a microscope. The more compact the crystals, the brighter the polish and more durable the stone. Its toughness, or ability to endure impacts, increases with the density of its structure. The Mohs hardness also varies, sitting between 5 and 6. This makes turquoise ideal for carving into beads, objects d’art and other figures.

The gemstone only forms under specific conditions, where the earth is dry and groundwater is acidic. As this water seeps through the earth, it may dissolve or oxidize aluminum, phosphorus and copper bearing minerals, which then mixes into the liquid. The mixture eventually fills underground cavities twenty meters or fewer deep, and eventually solidifies.

Countries that mine turquoise include China, Iran, Chile, Australia, Mexico and the United States. In the US, there are mines in Arizona, New Mexico, California, Colorado and Nevada. Arizona in particular is known for its turquoise quality, with the Kingman mine known for producing jewels with exceptional color. Areas that mine copper in addition to turquoise are believed to produce bluer gemstones.

Turquoise is usually cut into cabochons, a shape which helps show off the jewel’s color, texture and polish. It’s also well suited for shaping into beads, inlays or carved into charms and pendants. Turquoise has been found in an array of sizes, from cabochons a half carat or smaller, to rough large enough to carve into vases. No matter the carat size, a turquoise’s even coloring, fine texture and ability to take polish are carefully considered.

Most forms of turquoise shows veining and other pieces of matrix from where it was formed. This shows as brown on the gemstone. Some designers and collectors make use of turquoise with matrix that is evenly distributed across the stone or is otherwise unusual and lovely to look at, such as patterning that resembles lace or spider webs. Turquoise without matrix is uncommon and resembles a smooth expanse of blue green. They are highly sought after.

Traditionally, the most prized color of turquoise is a blue of medium tone and strong saturation. This color may be compared to the sky, robin’s eggs or called “Persian blue” in honor of traditional Iranian mines. Modern designers and connoisseurs may also seek blue green or yellow green turquoise for unique pieces of jewelry. 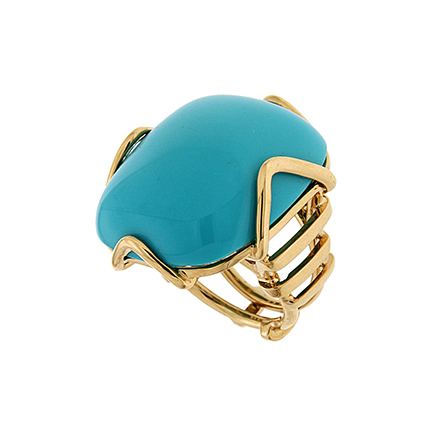 The hardness and toughness of a turquoise gem can vary depending on the stone and how porous or compact it became during formation. Those cautious about durability may want to consider jewelry such as necklaces or earrings, which are less likely to experience accidental bumps. If one wants turquoise to grace their ring or bracelet, they may want to reserve the piece for special occasions rather than daily wear.

Turquoise is light stable, making it safe to wear by day or under strong artificial lighting. Excessive heat may dry out the stone, leading to discoloration. When storing turquoise, it’s best to place it away from radiators, bright windows or other places that may become too hot. Wrapping the jewels in tissue paper or cloth to discourage scratches is also recommended.

Due to the chemical composition of turquoise, it may be prone to discoloring. Try to limit the gemstone’s exposure to cosmetics by putting it on after applying skin and hair products. Prolonged exposure to skin oils may also influence the gem’s color, so it may be a good idea to wear the jewelry over clothing if possible, and clean the stone regularly. Using a damp cloth and mild detergent is preferable to methods like ultrasonic cleaning.