The lush green of emeralds has inspired people for centuries to connect it with the abundance of nature. Green is also the color of spring and flora, linking emeralds with the growing seasons, youth, and nature’s rebirth. The internal clarity characteristics of emerald are even called jardin, or garden. As a birthstone, emeralds are associated with May, when spring borders onto summer. 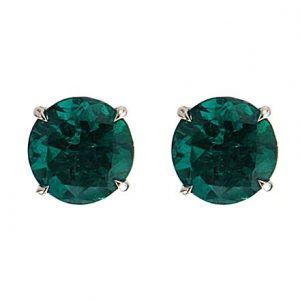 Along with healing and renewal, emeralds served as charms against lies. As part of an emerald’s ability to reveal truth, its wearer gained the power to speak with wit and eloquence. Between this trait and the jewel’s symbolism, it’s perhaps no surprise that emeralds have been a favorite of royalty as diverse as Cleopatra, the Mughal emperors and British royalty.

Emeralds were also believed to contain a number of health benefits. Pliny the Elder was adamant in the power of green to relieve eye strain, and felt that looking at an emerald was the best way to refresh vision. To alleviate fevers, one wore and emerald around their neck. For people with stomach ailments, two emeralds were used. One was worn on a string long enough for the jewel to rest on the stomach, while the other was held in the mouth.

Emeralds are the most iconic member of the beryl family. While beryls in their purest form are completely colorless, emeralds get their famous green color with the help of chromium mixed into the jewel’s chemical structure. Only stones with the deepest verdant hues are classified as emeralds, the more lightly tinted versions are simply called “green beryl.” The most coveted shades are bluish or pure green with heavy saturation, but still bright enough to showcase its coloring.

The other celebrated feature of emeralds are their clarity characteristics, known as their jardin. The inclusions may be fissures in the lattice structure, pockets of gas or fluid, or even tiny samples of another mineral. While jardins contribute to an emerald’s beauty, they also impact the jewels durability. To discourage accidental damage, emeralds are often cut into cabochons or rectangular shapes with parallel facets, also known as an emerald cut.

Due to the way emeralds form underground, large rough is uncommon and cut emeralds larger than a few carats are rarer still. The Mogul Mughal Emerald weighs 217.8 carats. It was mined in Columbia, a country famed for beautiful emeralds, and sold in India’s Mughal Empire, whose ruling class adored emeralds. In 1107 A.H., or 1695-1696 ACE, the jewel was carved with holy invocations and floral and geometric motifs. The Mogul Mughal Emerald was auctioned at Christie’s in 2001 for the princely sum of US $2,272,400 and currently resides in the Museum of Islamic Art in Qatar.

“Renaissance Gem” – An emerald is a beryl, tinted deep green with the aid of chromium. Emerald crystals are grown in metamorphic rocks, which usually restrict their size, making larger stones extremely rare. Treasured for at least 4,000 years by various cultures around the world, the emerald is said to “quicken the intelligence as well as the heart”. The “jardin”, or fractures that are characteristic of emeralds, are traditionally filled with oil to minimize their impact on a stone’s appearance. For this reason, one should try to avoid cleaning emerald jewelry with hot soapy water, steam or an ultrasonic cleaner as this oil could be removed or damaged, making the inclusions and blemishes more visible.

Pliny the Elder said that looking at an emerald is the best way to relieve eye strain. While the color green and green stones were believed to reduce eye strain, with emeralds the best medium for treatment. On a similar sight related note is the Renaissance idea that emerald allowed one to foresee the future.

Conversely, emeralds were believed to be detrimental to the sight of venomous snakes. Ahmed Teifasbi wrote in 1242 of his experiment testing the idea. He made arrangements to borrow a viper in a basket from a snake charmer. After using a very long stick to put an emerald in front of the viper’s face, the animal became dazed and confused. It fled the basket, but not knowing where to go, soon went still.

Wearing an emerald on the index finger could help prevent disease. Other health benefits of emeralds include wearing it around the neck to treat fevers. If a person wore an emerald on a string long enough to let the jewel rest on the stomach, and placed another emerald in their mouth, they would be cured of poison and other stomach upsets. Other doctors of yore used emeralds to treat nerve ailments and hemorrhages.

Emeralds were associated with the ability to reveal the truth. Through this power, the jewel could reverse evil spells and enchantments. A malicious spell caster would be unable to start or complete their work if they were anywhere near an emerald. From there, the jewels also became charms against harmful magic.  One side effect of emeralds and honesty were the stones enabling their wearer to speak in an articulate and beautiful manner. The owner could grow wittier, gain a sharper memory and have the presence of mind to do well in finances. Other forms of truth included learning if a sweetheart’s pledge of love was true or false.

Emeralds and their verdant shades are associated with the flora of the natural world. Their bright color links the stone with spring, which may be why the stone is the birthstone of May. A variety of cultures and religions connect green with nature and plant life. From there, emeralds are linked with spring, growing seasons, youth and rebirth.

The color of emeralds does more than delight those who see it. Through the ages, people have determined that its deep green is so beautiful, it must have further qualities. The poetically inclined connected the jewel with nature, spring and renewal. Others tested the stone for health benefits, believing its color and mystical associations could restore the body and prevent harm.