To give diamonds their iconic brilliance, they are cut into carefully planned, complex patterns. Facets are carved in a plethora of angles at different places on the diamond. Each portion of the cut stone has its own name, to denote where it sits on the jewel. For example the bottom tip of a diamond is called a culet, while the flat top most part is known as a table.

Radiance within a diamond also has special vocabulary, with specific words indicating how light plays inside. “Brightness” refers to the white light that travels both inside a diamond and reflects back out. “Fire” is the prismatic effect of a diamond separating white light into the colors of a rainbow, to be spotted here and there among the stone. Lastly, “scintillation” is a blend of white light and dark spots, whose pattern changes as the stone moves. 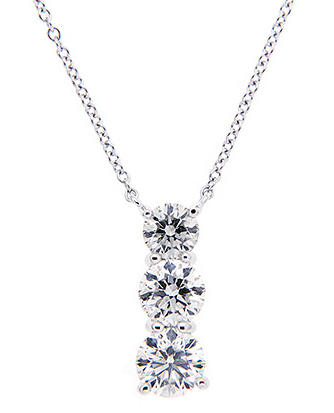 The first known diamond connoisseurs originated in India, with texts dating from 283 BCE and earlier describing the importance of the jewel. Diamonds were and are admired there for their luster, hardness and ability to scratch metals. Size was more valued than internal brilliance, leading to cuts such as the Mughal cut that preserve carat weight. Diamonds were also associated with the divine, with the deity Indra wielding a thunderbolt known as “Vajrayudham,” or “diamond weapon.”  India eventually traded its lesser quality stones to Greece and Rome. Pliny the Elder wrote of diamonds in his book Naturalis Historia, calling the gemstones the most valuable of all jewels and human possessions. He stated that diamonds counteract poison and madness while removing fear. Like in India, the hardness of the stone was deeply admired, leading high ranking people to wear diamond rings, possibly as a talisman.

Mineralogist George Kunz wrote “the diamond is to the pearl as the sun is to the moon.” He compares diamonds to a knight, a symbol for fearlessness and invincibility. Kunz recounts traditions which state wearing a diamond is to take on its virtues of strength and transparency. Other writers who loved diamonds include Saint Hildegarde, who wrote a 1254 text of the diamond’s ability to resist demonic influences. A 1531 book called “de lapidibus” said setting diamonds in gold and wearing them on the left arm dispels night time monsters, while an alchemist named Pierre de Boniface believed wearing a diamond turned one invisible.

Before scientists discovered the origins of diamonds, legends tried to explain their birth. One 14th century Italian text attributed the stone as a byproduct of thunder. Plato felt that diamonds came from the stars, and that the jewel had the ability to create gold. The 17th century chemist Robert Boyle believed that diamonds, being transparent, were formed from clear water.

Diamonds are strongly associated with romantic love and weddings. One of the most famous instances was in 1477, when Mary of Burgundy received a diamond ring as an engagement token from her intended, Archduke Maximilian of Austria. He chose diamonds and their unbreakable nature as a symbol of the strength of their relationship. The archduke’s gift prompted other wealthy families to give diamond rings at betrothals, a tradition that eventually reached all classes.  In the Child Ballad “Hind Horn,” princess Jean gives her beloved Hind Horn a ring with seven diamonds to remember her by, before he leaves on a long journey. One day, he looked at the ring and noticed that the stones had paled. Hind Horn took this as a sign that something was amiss and rushed back to Jean’s side, to find her about to marry another. The pair prevented the wedding and married one another, creating a happy ending.  In the 1930s, diamond company De Beers revived public awareness linking the enduring strength of diamonds with the steadfastness of married life. De Beers also emphasized the jewel’s connection to love, insisting that it’s the best possible gemstone for engagement and wedding rings. Today, diamonds remain the jewel of choice for engagements and weddings.

Diamonds are admired for their hardness, durability, and clarity. For countless years these attributes have been linked with supernatural abilities and gifts that can be conferred to the stone’s owner. In time, diamond’s mystical powers became linked with love, symbolizing everlasting relationships. The romantic connection effects jewelry and jewelry design to this day.