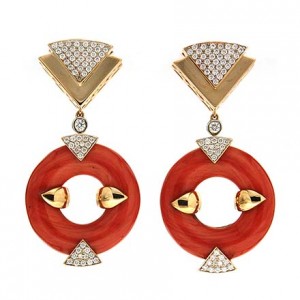 “Coral” commonly refers to sea animals of the Anthozoa class. They’re invertebrate creatures best known for forming colonies of many shapes and structures, at times resembling an underwater garden. Some species of coral, particularly members of the Corallium genus, have been favored for jewelry as far back as the Roman empire.

Corallium coral, especially Corralium rubrum, are prized for their intense red and pink hues. They grow 10 to 1500 meters below sea level, depending on the species. Corralium rubrum lives in the Mediterranean ocean and parts of the Atlantic, while other members of the genus reside in the Pacific.

Black coral comes from the Antipatharia family. While living specimens may take on red, yellow, green and other hues, they get their name from the color of their skeletons. They grow deep under tropical waters, with fourteen species growing around Hawaii. Black coral, or ‘ēkaha kū moana (little thorn coral,) has been used in Hawaii for centuries as both medicine and a gemstone. In 1987, black coral was declared the state gem.

Gemstone coral has a Mohs hardness of about 3.5, making it easy to carve. Between its softness and opaque nature, it’s frequently carved into beads, inlays, cameos and other fanciful shapes. Precious coral can also achieve a high sheen when polished, creating more aesthetic possibilities. Some coral objects d’art include vases with people and animals in relief, sculptures, masks and decorative cups. For centuries, the well-to-do would give their infants silver rattles with coral handles to teeth upon.

Unfortunately, coral’s popularity as a gemstone has led to overharvesting. This coupled with environmental changes has decreased the amount of precious coral in the wild. Countries which have traditionally collected the jewel now turn to conservation efforts to preserve coral for generations to come. Many jewelers, including Valentin Magro, now rely on preexisting coral stocks to create their jewelry rather than promote demand for harvesting.

Coral is beautiful, but requires precaution to keep it looking its best. Due to its softness, your coral jewelry may be better suited as a necklace or brooch than a piece more prone to bumps like a bracelet or ring. Depending on the species, coral may be on the porous side, making them vulnerable to absorbing unwanted materials.

As with more delicate gemstones, it may be a good idea to put on your coral pieces as the last part of your routine, and to remove them as soon as you return home, in order to limit exposure to cosmetics. When storing, try to place your coral in a location away from bright light and excess heat. The jewelry should be wrapped in tissue paper or otherwise secured against bumps and accidental scratches from other jewelry or from itself.

When it comes to cleaning coral jewelry, caution is key. Steam devices and ultrasonic baths may do more harm than good. The safest method to use on your jewelry is to use a lint free cloth to remove dirt and debris. If necessary, a damp cloth may be used, though detergent should be mild and in sparing amounts. 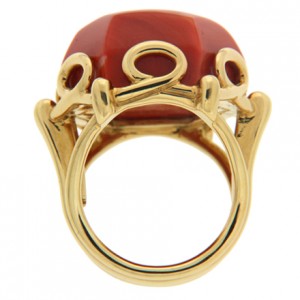 Coral, particularly the red kind, has long been associated with protective qualities. It was believed to hold back the influences of evil spells and magic, and keep its wearer safe for water related troubles. More of its protection was regarded as medical, warning against and keeping away disease, while offering the hope of restored health. Some stories mention coral changing color, adding a magical element to the jewel.

According to the ancient Greeks, the hero and demigod Perseus created coral by accident. After he killed the Gorgon Medusa, he placed her head in the ocean while he washed his hands. When he retrieved her head, he saw that the seaweed it had rested on was now dyed red from her blood. Inspired by this legend, the Greek word for coral is “gorgeia.”

Coral was thought to provide multiple health benefits, from preventing disease to stopping hemorrhaging. According to folklore, red coral serves as a warning signal. If its wearer ate poison or was otherwise at risk of falling ill, the coral would lose its color.  Renaissance writers attributed this quirk to the idea that coral was more fragile than the human body. Dreaming of coral means that one will soon recover from illness.  Precious coral was used to treat mental ailments as well as to grant wisdom.

Along with preserving health, coral was believed to have magical properties. Romans gave their children coral necklaces so they could benefit from the jewel’s protective qualities. Coral was also able to guard people against spells, as long as the gem was carved as little as possible and worn prominently on the body.  If the gemstone breaks, its power vanishes.

Coral was believed to give its wearers the power to end storms,  a 1515 book by Albertus Magnus says that those who wear red or white coral gain the ability to stop tempests, and can cross rivers in safety.