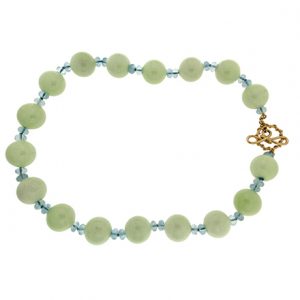 A type of chalcedony, chrysoprase is notable for its apple-green hue, caused by tiny inclusions of nickel mixed within the silica dioxide crystals. It has a similar appearance to chrome chalcedony, though the latter’s green is darker and derived from another element. Like all chalcedony, chrysoprase has a Mohs hardness of 6-7 and a waxy luster, and ranges from translucent to opaque.  Rather than having a solid hue, chrysoprase has layers of different colors, such as white and shades of green. Some gem cutters take advantage of the jewel’s multicolored nature, carving the jewel at a variety of depths to create a multi colored image. Cutting a striped chrysoprase crosswise can create banded gemstones for an unusual look.

Chrysoprase comes from the Greek words for gold and green. The jewel takes carving well, and may be shaped into ornaments as well as cabochons and faceted cuts for jewelry. While chrysoprase is available in solid green, some examples may contain streaks of brown and white. This gemstone may fade under excessive heat and light, requiring careful attention and storage to remain pristine.

Chrysoprase is commonly mined in Australia, Brazil and parts of Europe and the United States. The jewel is available in a variety of sizes, ranging from miniscule to dozens of carats large. Though the stone is translucent, its reflective qualities are modest. While it’s sometimes faceted, chrysoprase lends itself better to beads, cabochons and carved ornaments. 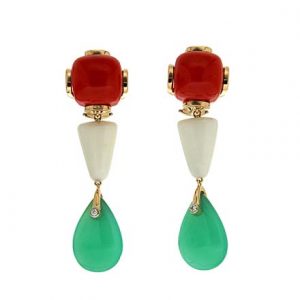 Chrysoprase is rarely transparent enough for faceting to be effective. The gemstone is more likely to be carved into cabochons for setting into jewelry, placed into inlays or made into beads. Its durability makes it a good choice for items like rings and bracelets which may experience accidental bumps, as well as pieces like earrings and pendants. Like other chalcedonies, chrysoprase lends itself well to carvings, which can be used for jewelry or other decorative pieces.

As with agate and other forms of chalcedony, chrysoprase is suited for carving into cameos and intaglios. The former is a type of relief carving, usually featuring a portrait or scene. While polychrome versions are more commonly known, chrysoprase cameos are more likely to display a single hue. Intaglios are the opposite of cameos, with carved images that create negative space, or indents in the jewel.

Chrysoprase and other chalcedonies were popular for centuries as intaglios for signet rings, as well as other forms of wax seals. Part of its popularity was due to hot wax being less likely to adhere to the rock, in contrast with other materials. These seals date as far back as 1800 BCE, and were widely used until the advent of the postage stamp.

In addition to jewelry, chrysoprase can be carved into items known as objets d’art, or items with an artistic flair. Examples include bowls, figurines, cosmetic boxes and more. Such items may go light on embellishment to concentrate on the beauty of the chrysoprase, though others, like a circa 1765 snuffbox from the Victoria and Albert Museum, may be encrusted with gold and other gemstones.