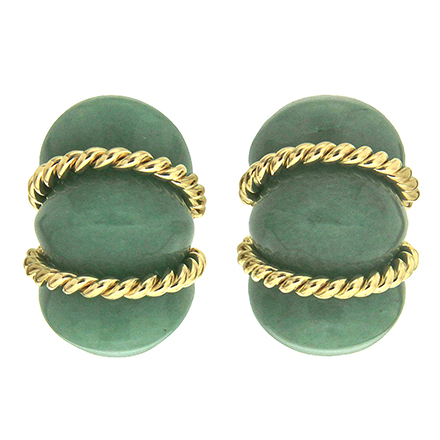 A member of the quartz family, aventurine is named after a type of glass. Both items have metallic flecks scattered about their interior, catching the light and giving the impression of glitter. Aventurine quartz gets its sparkling interior from inclusions of mica or hematite. The body color of aventurine is usually a light or medium green, though orange, brown, yellow and grey versions also exist.

Aventurine quartz is usually opaque, making it suitable for cabochon cuts as well as beads. Due to its nature as a stone made of several minerals, its hardness varies from 6.5 to 7. Though it has a similar name to aventurine glass and feldspar, the quartz has a different chemical composition and source of its sparkle. It’s mined in countries like India, Chile and Austria.

Feldspar aventurine, also known as sunstone, gets its shimmer from copper or hematite inclusions known as “schiller.” Copper inclusions make reddish or golden sheens, while rarer compositions create green body colors. While feldspar with calcium in its chemical structure normally makes sunstone, feldspar with potassium and aluminum may also have aventurescence. Aventurine feldspar is mined in Norway, Siberia and many locations in the United States. It’s often shaped into fantasy cuts, faceted cuts and cabochons.