“The Color of Royalty” – Amethyst is a transparent purple jewel and the most important variety of quartz used in jewelry. Amethysts range in color from pale lilac, sometimes referred to as “Rose de France”, to deep rich purples. 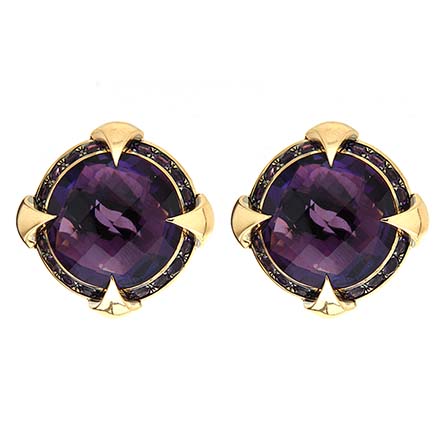 For centuries, purple has been linked to royalty, putting the shade into popular demand throughout history. Amethysts were thought to encourage celibacy while symbolizing piety and sobriety. This is perhaps why bishops chose this gemstone to wear in their rings.

A key part of amethyst lore is the stone’s association with clear thinking. George Kunz has a lot to say about the jewel in his text “The Curious Lore of Precious Stones.” The gem quickens the mind, making it a good item to keep in hand in battle and during business dealings. Amethyst also has the power to calm the overly excited. Kunz also wrote that multiple religions associate amethysts with love, and that Saint Valentine wore an amethyst ring carved with images of Cupid.

One of the more enduring symbols amethyst stands for is in its name. Deriving from the Greek words “to not be drunk,” amethysts were believed to prevent intoxication. Despite the stone’s reputation for sobriety, it became closely associated with Dionysus, the Greek god of wine. Some stories say that people who drink from amethyst goblets will not become drunk, making these ideal cups to use during negotiations.

In the 1500s, poet Remy Belleau wrote a tribute to amethyst and Dionysus titled “L’Amethyste, ou les Amours de Bacchus et d’Amethyste.” In the poem, the wine god falls in love with a woman named Amethyst. Wanting nothing to do with Dionysus, Amethyst flees, begging for help from the other deities. The goddess Artemis answers the woman’s prayers, turning Amethyst into stone. A humbled Dionysus pours wine over the crystals, dyeing the stones a deep purple.

Though it’s a crystal, amethyst’s purple hues give it a strong connection to wine. Since the stone cannot be ingested, it became regarded as a balancing force against wine’s intoxicating properties. From there, amethyst was linked to many virtues connected with keeping a clear head. Not only will its wearers remain sober, surely they can retain the presence of mind to stay safe and speak well.