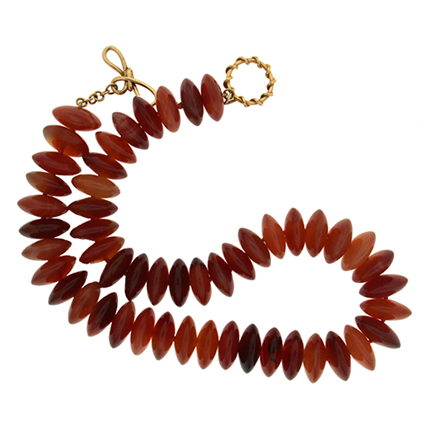 A striped form of chalcedony, agate has been admired and worn for millennia. Agate gets its distinctive layers as magma rises and sinks in underground cavities, leaving behind a succession of cooled rock. The stone was named by the philosopher Theophrastus after a river in Sicily called Achates.  Agate’s ability retain a strong polish and its stability against chemical influences makes it well suited for industrial tools. When used as a gemstone, agate’s banding may be used to highlight the jewel’s cut. One of its most famous applications is as a medium for cameos. By cutting into and carving an agate at varying depths, a multicolored image appears.

Agate is a mineral made from quartz and moganite. The jewel earned its name in the third or fourth century BCE, when the philosopher Theophrastus discovered specimens along the river Achates in Sicily. Agate is often found among metamorphic rocks or ancient lava, and is noted for its striped and spotted crystals. Its layers of color and ability to take polish has made the stone popular for thousands of years.

Wearing agate was thought to treat insomnia and induce good dreams. It was also believed to make its wearer calmer, thoughtful and cautious, enabling them to better earn wealth. Agate protected its wearer from earthbound obstacles and promoted courage as well as strength. Possessing an agate would bring happiness into a household.  Agate has the power to repel evil influences while bringing divine favor. It also was a symbol for a guiding spirit watching over the wearer. The jewel bestows its wearer with the power to prevent storms and lightning from occurring. Other earthly protections include the stone’s ability to ease thirst and fevers.

The jewel is associated with the zodiac sign Gemini, which falls between May 21 and June 21. Those born under the sign who wear agate rings will gain prosperity and maintain good health, especially in old age. Agate is further linked with the Hercules constellation. Those who possess an agate carved with the Hercules stars will win any conflicts which arise on a field.

A text was published in 1709 Vienna describing an unusual invention. An unnamed priest had built an airship, complete with an iron canopy studded with agate. The idea was that the stones would soak in warmth from the sun, becoming magnetic. The canopy would supplement two metal enclosed magnetic spheres in the cabin. Together the canopy and spheres would raise the ship. It’s not mentioned whether or not this invention was successful.