Getting married is a momentous event, uniting a couple into a lasting bond. Wedding days are filled with rituals and meaningful objects meant to symbolize a long and happy life together. An enduring marriage is also worthy of celebration and ceremony. It’s common for couples and their loved ones to mark anniversaries with tokens such as cards and flowers. Milestone years, which usually occur every five or ten years, may be celebrated with parties and meaningful gifts.

Anniversary celebrations date back to the medieval Holy Roman Empire, where husbands would gift their wives of twenty five years a silver wreath, and after fifty years of marriage, a gold wreath. Traditions commemorating marriages have since spread to other countries. In time, widespread prosperity allowed more couples to exchange gifts as valuable as their love to mark as many anniversaries as they desire, not just a few milestones.

Anniversary gifts by year range from humble, such as paper or candy, to lavish, like diamonds and platinum. Though many guidelines advising a certain gift for a particular anniversary, it’s difficult to pinpoint the origins of each gift idea. Part of the reason is due to many lists lacking a date of publication. Compounding the confusion are guidelines that distinguish themselves as “modern” or “traditional,” implying a change over time whose details remain mysterious. 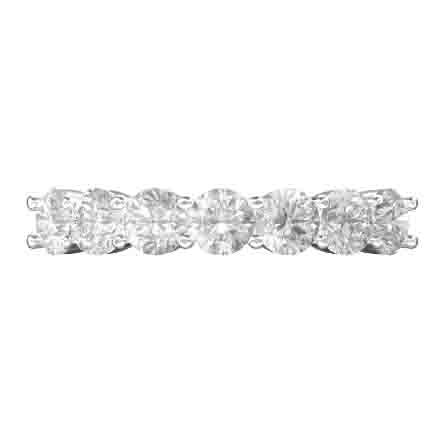 George Kunz’s 1913 book, “The Curious Lore of Precious Stones” provides some insight into when older wedding anniversary gifts became codified. He writes that during the nineteenth century there was a revived interest in legends and magic, partly in reaction to advances in science and partly to emulate scholars from past ages. In the “Birth-Stones” chapter, he writes of various cultures and religions which link gemstones to specific months, days of the week, constellations from the Western zodiac, and other dates. Kunz outlines the mystical and spiritual properties different jewels are believed to possess, and names the points in time when a gemstone is at its most potent. Among the occasions he lists are wedding anniversaries.

Years one through ten on Kunz’s list name simple items, such as candy and flowers. From year twelve onward, gemstones dominate the list, starting with agate. Precious metal appears twice, silver for the twenty fifth anniversary and gold for the fiftieth. Some jewels appear more than once, such as different types of sapphire for the twenty third, twenty sixth, sixty fifth and sixty seventh years. Diamonds mark the sixtieth and seventy fifth anniversaries.

For years that are multiples of thirteen, Kunz names gemstones he says are strong enough to counteract the unluckiness of the number. Moonstone is for the thirteenth year, blue star sapphires are for the twenty sixth, chrysoberyl for the thirty ninth, star rubies for the fifty second and gray star sapphires for the sixty fifth. Kunz writes that the three intersecting lines in a star sapphire represents faith, hope and destiny, and describes the star as “living.” He states that star sapphires are powerful enough to keep away the Evil Eye and other bad omens. The star may also serve as a guiding light. He has less to say regarding the other jewels, except moonstones are able to heighten the romance between two people.

When looking at suggested gifts by year, a person might not know where to look. Should one be traditional and use a list written decades to a century ago? If so, how old a guideline would be best? Is a list available from that era? There’s also the matter of lists contradicting one another, saying for example that diamonds are the proper gift for one year while another list says pearl. In 2000, the Chicago Public Library (CPL) compiled both traditional and modern lists from almanacs and encyclopedias to allay these questions.

The traditional list offered by the CPL has a number of items in common with Kunz’s list, particularly among gifts for the first ten years. However items don’t always appear for the same anniversaries. While Kunz names leather for year eight, for example, the CPL suggests it for year three. Other similarities include silver for the twenty fifth, gold for the fiftieth and diamond for sixty. Like Kunz, some years on the CPL’s traditional list have gifts that are in multiple years. Diamonds have year sixty and seventy five, while gold has fifty and seventy five as well.

The CPL’s list is simpler than Kunz’s, naming every year between one and fifteen before mentioning gifts for every fifth anniversary. The amount of gemstones named are far fewer, starting with ivory for the fourteenth year, and not listing another jewel until pearls in the thirtieth. Altogether, the traditional CPL list names ivory, pearl, coral, jade, ruby, sapphire, emerald and diamond.

The modern CPL guidelines contain quite a few more entries than its counterpart. Gemstones, jewelry and other valuable items are frequently named, with a number of repeats. Diamonds are listed for years ten, thirty, sixty and beyond. Various silver items ranging from flatware, hollow ware and sterling silver are also suggested. Most gems are named after year thirty, with diamond, pearl and unspecified colored gemstones mentioned for years ten and twelve. No special significance are associated with the gifts.

Many people today don’t follow codified lists. It’s common to give presents based on the tastes of the couple. Some spouses may not want to wait for a specific year to give an exceptional gift. A number of modern jewelry styles are designed to be given at any anniversary or occasion meaningful to a married pair.

Diamonds and diamond rings are an increasingly popular choice of gift for any anniversary year. Part of the desirability is due to the connections between diamonds and engagements, as well as the exchange of rings during a wedding ceremony. The beauty, love and steadfastness diamonds symbolize still hold as strong during a marriage as before and during its inception.

Three stone rings are a popular design for engagement, wedding and anniversary rings. They usually feature diamonds of the same cut, with the center stone larger than the flanking jewels. The three stones portray the past, present and future of a relationship. As an anniversary gift, this symbol may serve as a reminder that a couple’s bond is as strong as ever.

Instead of a few large stones, eternity bands are made of channel set diamonds that encircle the entire ring. The unending circle of jewels represent a strong and everlasting relationship. Initial marketing of eternity bands highlighted this symbol, promoting the band as a reminder of a still powerful love.

Wedding anniversaries have been celebrated for centuries. While a few landmark dates were initially recognized, more and more years are marked with symbolic gifts. In the past several decades, each anniversary was linked with an item specific to that number. While the meanings of most of these presents are unknown, one 1913 book gives some insight into why some gifts were given when. Modern couples may follow these guidelines, or choose to take another route such as diamond rings designed specifically with anniversaries in mind, or other styles that retain deep meaning for the pair.