Halos are a popular decoration for diamond rings and other jewelry. They are made of little jewels, usually diamonds, that surround one or more larger stones. Halos add brilliance, and depending on the design, a study in contrast with bigger gems. The gems in halos are often the same cut and size, though what these are varies. 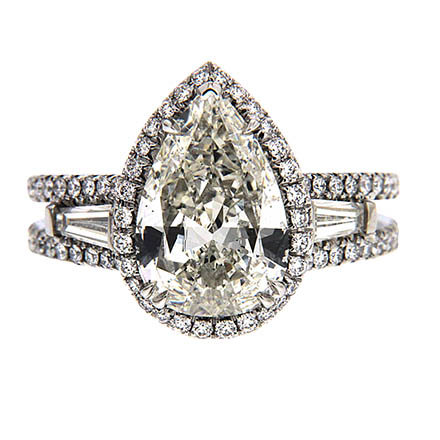 The most common type of halo is made of tiny round brilliants. This shape allows them to fit around a variety of forms, including squares, hearts and circles. In engagement rings, they most often surround a single jewel. Designer engagement rings may feature halos around a row of stones, or three diamonds bordered in little gems.

Another popular type of halo is made of thin rectangular jewels known as baguettes. They’re used to surround triangles and other shapes with straight edges. Some diamond bands may feature baguette-only borders. Others intersperse other shapes among the baguettes, such as squares, for a varied look.

Oval diamonds sometimes appear as halos. Their elongated form makes them better suited to some diamonds than others. As with baguettes, they’re mounted along straight edged diamonds. Oval halos may be made of different sizes to create unique engagement rings.

The long sides of a tapered baguette diamond have a gentle slope. Unlike their rectangular cousins, the shortest ends of tapered baguette halos touch the central jewel. The effect creates a wide border and starburst effect as lines push away from the main stone. If the jewels are channel set, the edges of precious metal help create more decorative borders.