Floral Jewelry a Celebration of Color

Nature provides an endless source of inspiration for artists. Throughout the ages, jewelry designs have emulated invoke stars, animals, the seasons and more. Flora such as trees and flowers are especially popular, combining two already beautiful things.

Flowering plants consist of over 200,000 species. This leaves designers with a vast wealth of appearances to choose from. Many species have a close relationship with humans, undergoing centuries of cultivation and inspiring lore. 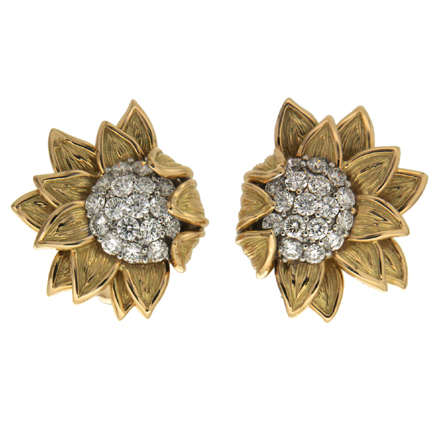 Specific plants have emotional, religious or other symbolism. Shakespeare’s A Winter’s Tale uses flowers to stand for the upcoming spring, as well as to express youth. In Hamlet, Ophelia gives out sprigs to the court, using rosemary, pansy and other samples to convey her thoughts. Floriography continued to be codified over the centuries, culminating in dictionaries published throughout the 19th century.

The Victorian era was a heyday for the language of flowers. Popular meanings included lilies and virtue, violets and innocence, and so on. Roses were categorized by color with red for romance, yellow for friendship and pink for gratitude. Painters such as pre-Raphaelites incorporated flora into their works to add depth of meaning. Flower jewelry was another expression of this language.

Floriography isn’t limited to the Western world. Plum blossoms, which bloom beneath the snow, stands for triumph over adversity in China. Lotuses bloom over muddy water, and are regarded in several Asian cultures as a sign of purity. In Japan, irises are a homonym for “victory.” Those who want their floral jewelry to stand out can look to other sources for inspiration.

One way to create a gem flower is through mounting. One version is to set multiple round or pear shaped jewels around a single, smaller stone to create petals around a floral axis. Petals can be made from round, pear, marquise or other shapes for variety. Elaborated blossoms can use dozens of jewels to make up the stem, the center, or other parts of the flower. These pieces are secured through pave, invisible or similar mounts.

Flowers can also be carved into shape. These are best achieved through gems that are soft enough to carve, yet sturdy enough not to break as they’re being fashioned. Favored gemstones for this purpose include chalcedony, rock crystal and tourmaline, which give translucency to petals. Opaque stones like turquoise also make attractive pieces, especially with a strong polish.

Enamel is a mixture of quartz sand, potash, borax and other materials that melts into glass when fired. Different formulas create unique color. Both champlevé and cloisonné use enamel within cells of precious metal to create designs such as floral imagery. Plique-a-jour is a technique reminiscent of stained glass, adding translucency to enamel flowers and leaves.

Specific motifs based on flora include guirlane and gardinetto. The former, also known as “garland,” refers to hanging elements on necklaces, brooches and other pieces. They often resemble wreaths, flowers and other greenery. Gardinetto refers to a bouquet in a basket, vase or wheelbarrow in jewelry form. These flowers may be carved, shaped from precious metal, depicted with mounted jewels, or a combination of methods.

En pampille is a term for graduated gems ending in pear shapes, which hang from jewelry. This design can be used to evoke vines or garlands. En tremblant is a technique where jewels are placed on a spring or other device that allows the piece to quiver with the wearer’s movements. When combined with floral motifs, the design can resemble a garden in the breeze.

In addition to floriography, flower jewelry was popular throughout the Victorian period. This was displayed early on with Queen Victoria’s orange blossom themed wedding set, which the fashionable quickly copied. Floral jewelry which invoked medieval and renaissance styles were also in vogue, so much that antique gem flowers were displayed in the 1851 Great Exhibition in London. As time went on, designs became more sinuous, with influence from Art Nouveau.

Art Nouveau’s heyday was from 1890 to 1910. It was inspired from Japanese woodblocks, an emphasis the handmade, Pre-Raphaelite work and encompassed all art forms, from painting to jewelry. It distinctive features include whiplash lines, asymmetry and images of the natural world. Art Nouveau flowers were depicted in gold, plique-a-jour and colored gemstones. Stems, leaves and garlands were shaped into the style’s characteristic curves.

The Edwardian era lasted from 1901 to 1915 and left a strong impression on jewelry design. Diamonds were the gem of choice, and advances in technology increased the use of platinum. Openwork jewelry was made to be as delicate as possible, and hanging elements were popular. Wreaths, garlands and lacy flowers were common images.

The Retro period of the mid-20th century was characterized by bright colors and innovation. Floral jewelry of this era featured fewer diamonds, more colored gemstones, and played with tiny cut gems. The invisible setting was introduced at this time, leading to flowers with no visible metal. Pave too was used to create bouquets, gardens and other imagery.

Today’s floral jewelry also celebrates color, though to a different extent than the Retro period. Diamonds are more commonly used to highlight gemstone blossoms, and white toned metal as well as gold serves as the base for jewelry. Flowers may be as simple as stones clustered around a common point, elaborated with carved jewels, or extravagant confections depicting bouquets of many hues. Custom made pieces are also popular, allowing connoisseurs to make their visions a reality.