Customization came into being early this century as a way of passing the control over to the buyers, and before we knew it, it journeyed through industries making general commodities made-to-order for buyers. In the jewelry industry, the fad of customization came much later, but it made up for the lost time by giving customers freedom of choice and control over the price. However, the modern business of jewelry customization owes largely to the technology called 3D printing. You might have heard about it already, but its connection to custom-making jewelry is quite an interesting one. 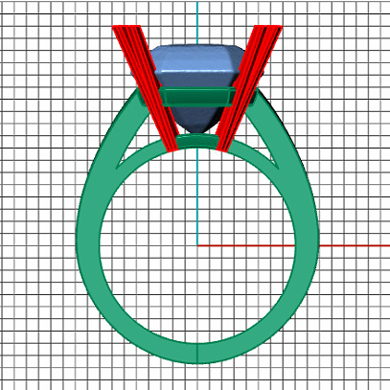 Personalizing Jewelry through 3D Printing Saves Time and Effort
3D printing plays a critical role in custom making of jewelry. In fact, without it, customization would never have been this precise and detailed. When a customer asks a jeweler to create a new product by combining two different items in parts, it is 3D printing that comes to rescue. Through 3D printing, jewelers have done away with the painstaking process of wax modelling. It took hours and undivided attention. 3D printing is a smarter and faster alternative to wax modeling, only that it doesn’t require the designers to model with wax at all. Everything happens digitally, but as neat as hand-curved wax models. That buys the craftsmen more time and creative freedom.

How It’s Done
Like classical jewelry designing, designing through 3D printing too starts at drafting the design. When the designs are run by the customers, the jewelers, with the help of CAD or Computer Aided Design put it together on the computer. Through 3D printing, a mold of the design is instantly printed out. CAD and 3D Printing are the two major tools used in architecting, robotics and prosthetic development. However, for the jewelry industry, the software requires to be used only in a small scale to achieve mind-boggling results.

Jewelers at 3D Printing
However CAD is not a simple software designed for all. It is something that requires at least 2 years of formal training to operate. That’s the sad reason why most small jewelry traders are not able to exploit this technology to their advantage. However, most upscale stores have already introduced it to their infrastructure for faster and more precise designing outcomes. It might be a bit of an investment at first, but the rewards by far, outweigh the money spent.