The round brilliant diamond is one of the most popular of all diamond cuts. It’s a cut of choice for engagement rings, wedding bands, pendants and any other jewelry one can imagine. There is no single way to create a round brilliant, though jewelers are constantly experimenting with proportions, ratios and facets to create the brightest possible diamond, or an ideal cut. 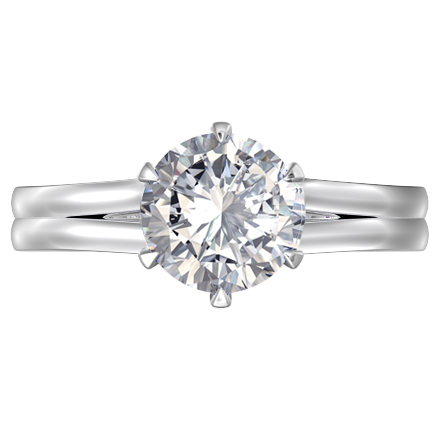 In 1919, Marcel Tolkowsky published Diamond Design, which examined the relationship between light and diamonds. He illustrated the ways light reflects inside the jewel, how cut influences brilliance and outlined how to fashion a diamond so it would provide then-unprecedented brilliance and fire. Shape, symmetry, angles, the number and placement of facets and other factors contribute to brightening a diamond.

Since Diamond Design’s premiere, others have sought to improve upon Tolkowsky’s designs. Some tweaks better the cut’s durability, such as faceting the tip to prevent chipping. Others sought to increase the brilliance of the original cut, with some modifying ratios and proportions, adding guidelines or changing facet patterns. The common theme throughout these variations is to provide a bright ideal for diamond cuts.

The differences between these cuts may produce more fire than brilliance, greater scintillation, or optical effects visible through special viewers. Choosing that makes a diamond ideal is subjective. What makes a cut ideal depends on the taste of the wearer, who should select their jewels based on what they enjoy.

Before the Round Brilliant

The 1919 publication Diamond Design outlined the shape, proportions and other factors needed to create diamonds of then unprecedented brilliance. The round brilliant cut Diamond Design proposed did not emerge from a vacuum. Its basic outline and bright ideal had been around for centuries and numerous earlier diamond cuts.

The single cut emerged around the mid seventeenth century. It followed the outlines of octahedral rough, with a tapered lower half and an upper half with sloped sides. Single cuts resemble simplified round brilliants, with a flat top facet known as a table, eight facets surrounding the table, and eight facets on its lower half. This design had more facets than its predecessors, and greater potential for brilliance.

Old mine cuts premiered during the mid-eighteenth century as a response to increased diamond availability and advances in science. Due to a greater awareness of diamond’s optical properties, diamonds received more facets, fifty-eight compared to the single cut’s seventeen or eighteen. While the old mine cut’s brightness was a stepping stone for the round brilliant, its squarish outline makes it a closer relative of today’s cushion cut diamond.

The old European cut was developed in the late nineteenth century after the invention of the bruting machine. This device gave cutters greater control with their work, leading to increased symmetry and precision in diamond cuts. It also allowed jewelers to make round diamonds, not just the oval, squarish and other shapes common at the time. Old European cuts also had greater scintillation, or play between brilliance and shadow.

Diamond Design’s round brilliant has a lower crown than old mine and old European cuts. It specifies fifty-seven facets for the diamond, like the old mine cut, but with different placement and overall proportion. One of the notable details which help the round brilliant stand out from its predecessors is that all its pavilion facets reach from tip to girdle to help with light return. Diamond Design specifies that the diamond shouldn’t be too deep or shallow, but have a depth range which encourages light to keep reflecting within the jewel, making it brighter.

The round brilliant cut of Diamond Design has in turn served as inspiration for other cuts. Several round brilliant variations such as the Eulitz Brilliant or Practical Fine Cut aim for stricter adherence to proportions, adding subtle differences to their cuts in hopes of increasing brilliance. Other round diamonds keep the recommended depths and percentages, but add still more facets, trying to make diamonds even brighter using lessons from antique cuts.