Larger diamonds are rarer than smaller ones. Cutters strive to preserve as much carat as possible while highlighting the jewel’s best characteristics. In many instances, the final cut follows the outline of the rough, keeping more of the stone intact. The rose cut is one such example. 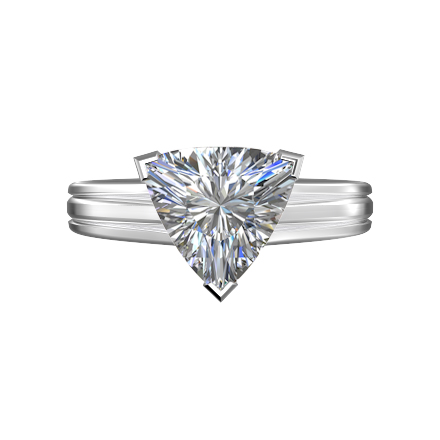 Rose cut diamonds were popular from the sixteenth through nineteenth centuries. These jewels typically consisted of a flat stone with a faceted upper surface. They lacked a table facet common to modern diamond cuts, but had tops that came to a peak. A variant known as the double rose had top and bottom halves cut in the same style, both ending in points.

Sometimes as a diamond forms, the crystal grows first one way, then changes orientation and finishes forming in a different direction. This is known as twinning, and the most common type of twinned diamond is a flattened triangular shape known as a macle. Cuts that can be fashioned from macles has been traditionally limited, due in part to cutters wishing to preserve carat.

Today, macles are often turned into fancy cuts such as trilliants or hearts. For centuries, they were transformed into rose cut diamonds. This retained more weight than turning rounder diamond rough into the flatter cut, or removing large amounts of macle to create proportional, deeper cuts. Roses and macles made an efficient pair.

Rose cut diamonds were more brilliant than their table cut predecessors. Rather than having a few rectangular facets, rose diamonds had a number of triangular facets which better caught and reflected light. Its domed top may also have helped the cut display more brightness. Antique jewelry with rose cuts may have foil backing to further show off white light.

While rose cut diamonds have fallen out of favor, their descendant, the briolette is still used. Double rose cuts eventually took on elongated forms such as ovals and pears. By drilling a hole through one of the ends, the diamond becomes a briolette that can be worn as a drop on a pendant or other piece of jewelry, catching light as it moves.

It’s not uncommon for diamonds to bear traces of their time within the earth. This can manifest as other materials caught within the crystal, striations on the rough or impressions on the crystal faces. Trigons appear on octahedral diamonds, rough gems that resemble two pyramids attached to the same square base. These quirks appear as a series of a series of triangular indents on the jewel.

Before cutting a diamond, it’s important to find out where its cleavage and sawing planes are located. Diamonds are among the hardest of natural substances. Dividing the jewels is only possible in the directions where atomic bonds are their weakest. While these planes may be apparent on well-formed rough, pieces weathered from their time in the earth or water are harder to evaluate.

Not only do trigons only appear on octahedral diamonds, their tips always point towards the center of the diamond, the square base that connects the pyramids. This is true whether the stone has eight perfect sides or has worn down over the years. As long as some trigons remain visible, cutters can use them to determine where the jewel’s cleavage and sawing planes lie.

Trigons are also useful when it comes to determining a gem’s identity. They’re so closely associated with diamonds that seeing them on the side of a jewel strongly implies the nature of the stone. It’s still important to conduct other tests to confirm what the gem is, but trigons are a step in the right direction.