The round brilliant diamond is one of the most popular diamond cuts. Other cuts that promote brilliance, such as the cushion, princess and radiant cuts are also in high demand. Common alternatives to brilliant cut diamonds include step cuts that showcase luster and clarity. Still more cuts highlight other aspects of the jewel. 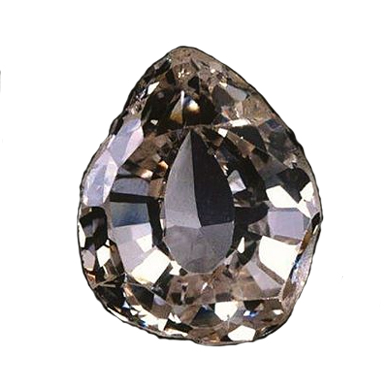 The Mughal cut was used in India during the 16th through 18th centuries. Rather than shaping the diamond to underscore its brilliance, this cut followed the lines of the original rough. Symmetry was downplayed in favor of preserving as much carat as possible. The bottom of the diamond consisted of a single flat plane and a large top facet. The sides of the jewel were often curved, with many smaller facets.

While Mughal cuts are uncommon today, some well-known jewels have or had this style. The Orlov diamond originated in southern India, where it’s said to have spent centuries in a temple. By the late 18th century, the 189.62 carat jewel made its way to the Russian court, where it was set into a custom designed scepter. The Orlov diamond retains its original Mughal cut, unlike the Koh-I Noor diamond. While the Koh-I-Noor was originally fashioned into a Mughal cut to suit Indian tastes, it was recut after it was gifted to British Queen Victoria to achieve greater clarity and brilliance.

Polki cut diamonds also originate from India and follow the lines of the rough diamond. The cut is an ancient one, believed to have been developed 3,000 years ago. Instead of relying on cleaving, sawing or other techniques to shape the jewel, polki cut diamonds are unfaceted, achieving its shape through polish. The light they reflect lacks the brilliance and fire of other diamond cuts, but gives off a softer sheen.

Modern polki diamonds are often made from heavily included rough that’s unlikely to become a brilliant cut. Clarity characteristics also give polki diamonds an unusual appearance, displaying qualities that are usually downplayed in other cuts. Polki diamonds are usually backed with silver or gold foil to increase its brightness. They are used in Indian style jewelry more often than Western, and are frequently mounted with yellow gold of high purity grades, such as 24 karat.

Many notable diamonds have been commemorated as simulants. This can be for record keeping purposes, so that others may have an idea of what the jewel’s appearance. Replicas also come about as an attempt to understand what a gemstone might have originally looked like, or if it may have siblings cut from the same rough.

The French Blue, a predecessor to the Hope Diamond, was cast in lead around the time it was cut, about 1673. It was a custom of the cutter’s family to make casts of the crown jewels they fashioned as a form of record keeping. More recently, the lead replica was used as a reference point in historical cutting techniques, as well as to determine if the Hope Diamond has any “sister” jewels. In this instance, the difference between the simulant and original jewel is clear, as lead bears little resemblance to diamonds.

Another diamond, the Koh-i-Noor, has been replicated with a material somewhat closer to diamonds, glass. The simulant was made between 1850, when it arrived in the United Kingdom, and before 1852, when it was drastically recut, losing over 40% of its carat weight. The glass “diamond” serves as a record of its previous size and cut. While glass is closer in appearance to diamonds, they’re dissimilar in terms of brilliance.

The Orlov diamond is a Mughal cut jewel weighing about 189.62 carats. Most Mughal cut diamonds in the West have been recut into more brilliant styles, making the Orlov a rarity. Its measurements are an approximation, as it’s rarely removed from its mountings. Copies of the Orlov allow researchers to get an idea of how its facet patterns influence how it takes in and reflects light, without interference from its setting. Researchers are also able to estimate what the jewel’s appearance and brilliance from multiple angles.