Diamonds From Underground to the Surface

Rough diamonds are a product of nature, requiring countless years and specific conditions in order to take shape. Still more factors are required to bring them safely to the earth’s crust. From there, it is up to the efforts of people to find the jewels so they may be admired by others.

Diamonds form in the upper mantle of the earth, under portions of continents which provide the intense pressure needed to create the jewels. Volcanic activity pushes the gemstones upward, sending them to the crust. To keep diamonds intact, expanding gasses need to maintain the pressure to which the jewels are accustomed. The jewels otherwise change their atomic structure, turning into a different mineral. 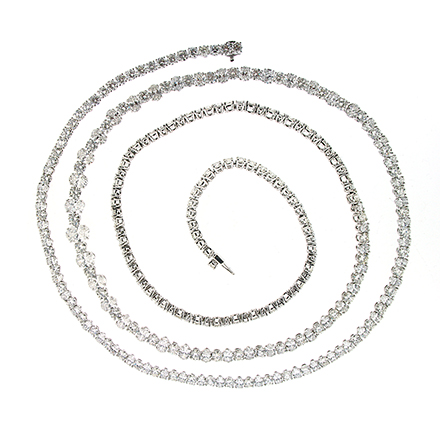 In locations where diamonds remain where they reached the crust, two types of mining may occur. Open pit mining is performed on the surface. These mines resemble a funnel made of stepped concentric circles, though the edges form a spiral to better allow vehicles to travel. The more ore that is removed, the deeper the hole becomes.

If a pit becomes deep enough, it may be more efficient to convert the mine to underground operations. These use a combination of vertical shafts and horizontal ones known as drifts. The areas above the drifts are drilled for ore, which are then transported to the surface via the vertical shafts. This form of mining is mechanized to put less personnel at risk.

Once the diamond bearing materials are extracted, sorting begins. Ore is crushed into smaller, easier to process sizes. Precautions are put in place to make sure larger diamonds aren’t accidentally harmed during the procedure. Material is then washed and sent through multiple devices which use diamonds’ physical traits to help separate them from the rest of the rock. One machine for example, uses the jewel’s relative heaviness to distinguish it from other stones when placed in liquid.

There are times erosion sends diamonds away from the volcanic pipes which brought them to the surface. These stones may end up in rivers or other bodies of water, where they sink to the bottom along with other dense material. Diamonds may be pushed along the current for a long time, traveling far away from their primary deposits. They are known as alluvial deposits.

Alluvial diamonds may be mined through large scale mechanized operations, or through independent miners with sieves. The former is accomplished through heavy equipment that takes large portions of earth and sends them to stations where diamonds are sorted from the gem bearing gravel. The latter method involves swirling gravel in water until only heavier stones remain. Diamonds are then picked from the other rocks.

Finding diamonds in the sea can be a complicated process. Jewels nearer to the shore are mined by creating dams and using of industrial vacuums. Diamonds further in the ocean may be retrieved by divers and specialized pumps. Even deeper locations use recovery ships equipped with crawlers to find the precious stones.

Canadian Diamonds
The popularity of diamonds means there are frequent efforts to search for potential deposits. Geologists keep an eye out for kimberlites, lamprolites and other rock that hint at the presence of jewels. While scientists suspected diamonds in Canada as early as 1899, the first mine wasn’t opened until 1998 after decades of investigation.

When looking for potential diamond mines, many details must be taken into consideration. The quality of the diamonds, the concentration of jewels amongst the host rock and the overall size of the deposit help determine if mining in an area is cost effective. Diamond quality is also important, such as the size of the rough and how many stones are industrial or jewel grade.

Adding to the complications of mining in Canada are the location of the deposits. The Northwest Territories can reach temperatures as low as 50 Celcius, making matters difficult for workers. The locations also have minimal infrastructure, meaning that supplies must be brought in and removed through chartered flights and ice roads. Mining here must also follow environmental regulations laid out by the government and First Nations groups.

After decades of searching and still more years of planning, the mines have been productive. Both the Diavik and Ekati mines produce about seven million carats of jewels annually. Among the gemstones found were unusually large jewels such as the 78 carat Ekati Spirit and the 178.66 carat Diavik Foxfire.

American Diamonds
The United States is home to many colored gemstone mines, containing everything from sapphires to sunstones. Diamonds have also been found within the country, even triggering a small gem rush in the early 1900s. Today, gem enthusiasts are able to search for diamonds in exchange for a small fee.

In 1975, mineralogists were examining Colorado limestone mixed with kimberlite. Efforts to cut samples for further examination resulted in broken equipment. Closer study revealed tiny diamonds mixed into the rocks. By 1987 a geologist established a diamond exploration company to further investigate the land. The Kelsey Lake Mine opened in 1996, unearthing D-Z color jewels and fancy colored diamonds, including a 28.3 carat rough. Due to various circumstances, the mine closed in 2001.

Earlier, in 1906, John Wesley Huddleston found diamonds on his Arkansas farm. He soon sold his property to a mining company and a diamond rush hit the nearby town. Several efforts at commercial mining were attempted, but by 1949 people experimented with turning the location into a tourist area. In 1972, the state bought the land, and the Crater of Diamonds State Park was formed. Visitors are welcome to search for and keep any jewels they find in exchange for the price of admission.

Though diamond finds are uncommon, some discoveries have made the news and established records. The Kahn Canary, discovered in 1977, is an uncut, naturally flawless fancy diamond which is often loaned to museums. Unearthed in 1924 and measuring 40.23 carats, the Uncle Sam diamond is the largest diamond found in the United States, though the 16.37 carat Amarillo Starlight is the largest jewel discovered since the land was established as a state park.