Why Fancy Colored Diamonds Continue To Be Trendy

Colors are pleasing to eye and often bring joy to the heart. However, every other color pales in comparison to the brilliance of gem stones that sparkle and shine along with displaying an ethereal hue. Sure, the colorless diamond is considered to be the best by the connoisseurs and industry giants but think of the vivid blue or a sparkling green emerald and you want to possess it immediately. That is exactly the appeal of fancy colors of diamonds! They are simply irresistible! 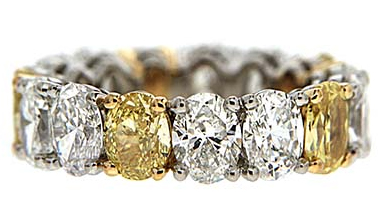 Well, you may read up on the 4Cs of a diamond and walk into an auction safe and secure about your capabilities of recognizing a quality diamond. Strangely nature has its own tricks as well! Remember that colored diamonds are assessed on the rarity of its color especially when there is no man-made enhancement carried out. The reds, oranges, and blues along with greens help you to make a bold and individualistic fashion statement every time. Likewise the very feminine natural pink diamond is much coveted by the celebs all over the world. Pity, it is so rare and only mined from Western Australia at present.

Then there are many stars walking the red carpet sporting glittering and magnificent colored diamonds of late. The fancy diamonds are sure to retain the value it had been initially sold for over the years even, if not actually seeing an increase in price. The Yellow diamond ring worn by Natalie Portman at the ‘Golden Globes Award Ceremony 2017’ grabbed many an eyeball. Yellow engagement rings have often been flaunted by celebs before since Audrey Hepburn showcased this spectacular fancy diamond in, ‘Breakfast at Tiffany’s’.

Sir Sean Connery, Mr. Bond (erstwhile) himself was overjoyed to have obtained $4 million for his orange & pink Briolette Cut colored diamond at ‘Sotheby’s Magnificent Jewels and Noble Jewels auction,’ Geneva during November 2015.
Diamond lovers had been thronging such auctions whenever a well-known fancy comes up for sale. Sure enough the fabulous ‘Bulgari Blue’ earned Christie’s $15,762,500 the very same month. The extraordinary Pumpkin Diamond, accidentally discovered by a farmer in South Africa whetted the appetite of the rich and famous for all sorts of exceptions in diamonds. The rare Orange Pumpkin Diamond graced the fingers of Halle Berry in 2002 when her ring was photographed more often than the actress at the Academy Awards that year.

Sotheby’s also had an extraordinary run with fancy colored diamonds just the year before when a rarest of rare, ‘The Melon Blue,’ diamond was snatched away for $32,645,000. Exclusive auctions and exhibitions for such diamonds continue to be in vogue since then.  While 2016 has been hailed as ‘The year of the colored diamonds,’ 2017 looks promising too.