Differences Between Diamonds and Simulants

Diamonds are admired for their beauty and the way they interact with light. While discoveries of new deposits and advances in mining have increased availability of the jewel, there are times people may wear jewelry with pretend diamonds, also known as simulants. Diamond simulants are created when people desire sparkling but inexpensive jewelry, for security purposes, or to replicate a well-known jewel. No matter how closely a simulant resembles a diamond, there are still ways to distinguish real from imitation. 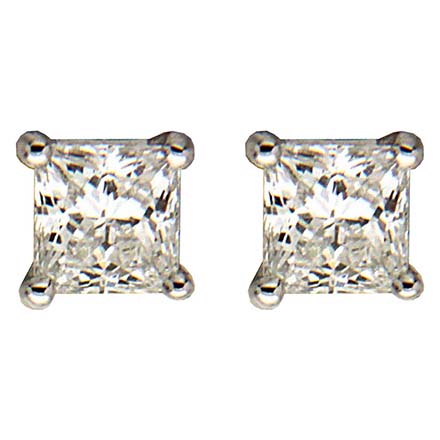 One way a gemologist can distinguish a diamond from a simulant is through light properties. The luster, or surface shine of a diamond, is classified as adamantine. Few other stones have this type of luster. Diamonds also have a strong refractive index of 2.418, more than most gems. The light that reflects from its facets is singly refractive, meaning that light travels in a straight line rather than splitting in two.

Diamonds are also famed for their hardness, or resistance to scratches. While scraping your jewelry is highly discouraged, examining you gemstones for signs of wear may be a clue to its identity. Likewise, guessing the jewel’s identity by examining how it fractures isn’t a good idea. More subtle clues include testing for specific gravity, or the density of the jewel as compared to water.

Folk advice for distinguishing a diamond include breathing on the jewel to see if it fogs, reading type through the stone, or using a loupe to check for flaws. The first two tests are unreliable, as many factors including ambient humidity, the cleanliness of the stone and the type of diamond cut may influence the outcome. Examining the jewel with a loupe can be a challenge if the person is inexperienced and doesn’t know what to look for.

The most straightforward way to tell a diamond from a simulant is to consult an expert. Reputable third party laboratories such as the Gemological Institute of America provide certification for diamonds and other precious gemstones. Among the tests conducted is determining if the jewel is authentic or a simulant. The certificate records the nature of the stone.

Natural Simulants and their Properties
Before the mid twentieth century and its boom in laboratory created gemstones, most simulated diamonds were fashioned from other jewels. Even today, there are people who prefer wearing naturally formed stones as stand ins for diamonds. These gems are selected for their light colors, luster and refractive properties, though they still stand apart from diamonds.

Zircon is a silicate mineral whose colorless versions were traditionally used as a diamond simulant. Its luster varies from vitreous to greasy to adamantine, the latter of which matches that of diamonds. Zircon’s refractive index is much lower, between 1.925 and 1.961 compared to diamond’s 2.418. The simulant also has a specific gravity of 3.93 to 4.73, while diamond is about 3.5. A carat of zircon will have a different size than a diamond carat. Its optical dispersion, also known as fire, is 0.039 compared to diamond’s 0.044.

White sapphire is a colorless form of corundum. It has a vitreous to subadamantine luster, which can give it a shine similar, but not identical to a diamond’s. Common clarity characteristics for sapphire include rutile, which can impart a silky appearance which further distinguishes the two gemstones. White sapphire has a refractive index of about 1.77 and a dispersion is 0.018, giving it much lower brilliance and fire.

Colorless quartz, also known as rock crystal, has a high level of transparency. It has a vitreous or glassy, luster and a Mohs hardness of 7, increasing the likelihood of wear on its facet edges. Its refractive index is about 1.55 and has a dispersion of .013, giving it noticeably less brilliance than a diamond. Quartz’s specific gravity is 2.65, making its single carat jewels a different size compared to a diamond of equivalent weight.

Synthetic simulants and their properties
Natural diamonds only form when the conditions are just right. This rarity influences the demand for diamonds, as well as their prices. Some people may choose to wear diamond simulants as an affordable, easier to find option. Developments in laboratory-made stones give people a wider range of simulant options to choose from. Their properties are still very different from diamonds.

Glass is an amorphous silica that is both found in nature and manufactured by humans. This substance can be doctored with many additives, making it a popular traditional jewel simulant. It has a vitreous luster and Mohs hardness of 4 to 6, making it on the fragile side. Its refractive index is low at 1.48 to 1.7, so additives and foil backing is employed to add brightness. The variations known as crystal glass and lead glass traditionally contained differing amounts of lead oxide to improve its refraction. Due to safety concerns, materials such as zinc oxide are now used, which leads to lower, but still improved brilliance.

Strontium titanate is a synthetic version of the mineral tausonite. As a diamond simulant, it was commonly used from 1955 to the late 1970s, when other synthetic diamond simulants became popular. It has an adamantine luster and a refractive index of 2.409, giving it a strong superficial resemblance to diamonds. The stone however has a Mohs hardness of 5.5 to 6, meaning that it has a higher likelihood of wear on its facet junctions.

While naturally occurring cubic zirconia (CZ) exists as a form of metamict zircon, the vast majority of CZ on the market is laboratory made. Cubic zironia was first synthesized in 1929, but only became widely available for jewelry in 1977. Its luster is adamantine, with a refractive index of 2.15 to 2.18, making it slightly less brilliant than diamonds.

Moissanite is a silicate rarely found in nature; the majority of moissanite on the market is synthesized. The simulant has limited heat stability, when exposed to temperatures of 60 Celsius or higher, they’ll eventually discolor. Moissanite has a refractive index of about 2.65 to 2.69 and a dispersion of 0.104, giving the stone strong brilliance and fire. While diamonds are singly refractive, moissanite is double refractive, which can give their facets a blurry appearance.