Fancy color diamonds are rare. For every ten thousand diamonds mined, there is one Fancy diamond. Some hues, such as brown or yellow, are relatively common, while others like blue are less available. While many Fancy diamonds are set in jewelry or enjoyed individually, others are displayed for the public to view. The Aurora Pyramid of Hope is a collection of Fancy diamonds which has been showcased in various museums since 1989.

The collection began in 1979 by gem dealers Alan Bronstein and Harry Rodman. The former had developed a deep fascination with Fancy color diamonds and began gathering them. His enthusiasm rubbed off on his friend Rodman, and over the course of decades, they amassed hundreds of stones of many hues.

As of 2007, the Aurora Pyramid of Hope contains 296 diamonds, with a total weight of 267.45 carats. The collection has a range of colors, including green, pink, blue and chameleon stones. The cuts of the individual stones vary, including round brilliants, step, mixed and fancy shapes such as pears and hearts. Many stones in the collection are capable of fluorescence, ranging from typical blue to uncommon yellows and reddish hues.

From 1989 to 2005, the Aurora Pyramid of Hope was on display at the American Museum of Natural History in the Morgan Hall of Gems. At this time, the pyramid consisted of 260 jewels. During its stint with AMNH, the collection went on an international tour in 1998 traveling to parts of the United States, Canada and Japan. As of 2006, the Pyramid was on display at the London Museum of Natural History. 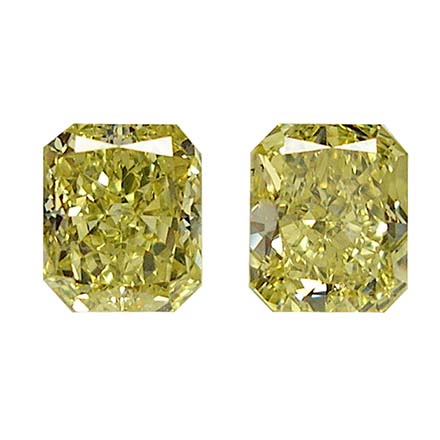 Diamonds react to changes in their environment. As they form, this can manifest as twinning, grain lines, crystals within the jewel, and other details. When a cut diamond is exposed to light, brilliance and fire brighten the gemstone’s interior. Radiation, such as from X-rays or ultraviolet light can also influence a diamond’s appearance.

Under certain conditions, diamonds glow. When hit with X-rays, diamonds fluoresce for a short time. Large scale mines take advantage of this trait when sorting diamonds from overburden. As rocks are poured from one conveyer belt to another, they’re exposed to an X-ray beam. If a stone fluoresces, it triggers an air jet to blow it into a bin for further sorting.

With most diamond grading, fluorescence is used to denote how a diamond reacts to ultraviolet light. About 25-35% of diamonds glow after exposure to UV rays. The majority of these diamonds turn blue, though red, yellow and other hues have been recorded. Though fluorescence rarely impacts the overall appearance of diamonds, they serve to help distinguish individual jewels form one another.

Sometimes naturally occurring radiation creates color centers in diamonds, changing their hue. If the coloring is uneven, it might qualify as a clarity characteristic. Even hues also occur, most often as the brownish tints in D-Z diamonds. Other times, the radiation-made color centers are dramatic enough to turn the jewel into a fancy diamond. One of the best-known examples is the Dresden Green diamond.

Diamonds are made of a series of tightly packed carbon atoms. When light enters the stone, the jewel’s density causes light to slow at a drastic rate. Diamond cutters take advantage of this refraction to make diamonds as brilliant as possible. However, not all light is the same. Various factors can influence how light interacts with a diamond and impact its appearance.

Different types of light showcase specific qualities of diamond’s cut. Diffuse, or scattered light, is ideal for drawing out brilliance. Light enters the diamond from many angles, suppressing fire and bringing brilliance to the forefront. Placing a diamond under fluorescent lighting will also draw out this effect.

Spot, or focused lighting, is used to promote a diamond’s fire. It causes the background of the diamond to darken, which in turn showcases fire’s sparks of color. To see if a diamond has the brilliance and fire you enjoy, try expose it to diverse types of lighting, or a mixture of spot and diffuse. This will allow you to see both aspects of the jewel.

For the best display of light inside a diamond, a stone must be faceted at carefully calculated angles, depth and proportion. This way, light is more likely to enter a jewel and reflect off its internal facets to illuminate the stone rather than leak through it sides. When debris such as fingerprints adhere to the diamond, the angle needed for light to remain in a diamond changes, but the stone’s proportions remain the same, darkening the jewel. Cleaning restores the gem’s brilliance.