Triangle cut diamonds have brilliant facets that add sparkle to their angular shape. This form has a contemporary look, making its use as a side stone very popular, although the brilliance and fire of triangle cut diamonds are also as a single stone in solitaire settings. Their bright factor also gives them the ability of hiding inclusions quite well. It is very important to consider the depth when looking for triangle cut diamonds because this will affect the fire and brilliance of the stone.

The Story of Triangular Cut Diamonds

This diamond cut has many names. The simplest version is the triangle cut, though some vendors give this shape fancy titles such as triangular brilliant, trillion or trilliant cut. Some of these terms have been trademarked, but are now available for wide use. No matter what they are called, these diamonds have common themes. 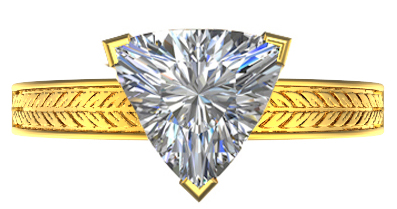 It’s hard to pinpoint the origins of the triangular cut. It was likely created as a way to make the most of oddly shaped rough, or diamond portions sawn off to make other cuts. To facet a rough diamond while staying true to its original shape preserves carat weight increases the value of the finished product.

Triangle cut diamonds tend to be equilateral, with each side of the girdle perimeter sharing the same length. The overall stone is shaped like a shallow pyramid with a triangular base, with or without curved sides. As with other types of diamond cuts, proportions are crucial to making a beautiful stone. Not only should the girdle have equal sides, the symmetry should be as exact as possible. If one side has a light curve, the other sides shouldn’t be much straighter or rounded then their neighbors. Table sizes should fall between 56 and 66%, a pavilion depth between 35 and 46%, and the optional culet should be small.

Triangular cuts are an unconventional choice compared to other diamonds like round brilliants or princess cuts. However, they make frequent appearances on diamond rings, flanking the center stone. They are also a good choice for people who want unusual jewelry. Due to their shallow pavilions, triangular diamonds look large for their carat size, giving them an economical advantage.

No matter the reasons for choosing a triangular diamond, keep in mind that the cut is prone to damage from bumps and other impacts. Corners are especially fragile. When choosing a triangle cut diamond, make sure that its corners are cut or encased in V shaped prongs to reduce the chances of chipping.

One of the world’s rarest diamonds is a triangle cut. In a diamond mine, one ton of earth may yield a single jewel quality diamond. Of these diamonds, one out of ten thousand may be unusual enough to be considered fancy colored. Only a scant number have enough quirks in their structure to tint them red. The Moussaieff Red is one of these extreme few. With its 13.9 carat rough, it is also the largest ever mined. In its current state, it’s a 5.11 carat jewel, cut into a triangle with curved sides. The fancy cut and number of facets combine to deepen the red hues of this priceless diamond.

The story of triangle cut diamonds is wrapped in mystery. They’re glamorous enough to be used on museums quality jewels yet thrifty enough to suit the budget conscious. People who seek their unusual beauty are rewarded with a jewel that will catch the eye of everyone nearby.