The oval cut diamond was created by Lazare Kaplan in the early 1960s. It is similar to the round brilliant, but the oval diamond’s more elongated shape makes it look bigger than its actual size. Oval diamonds set in engagement rings will make the finger of the wearer look slender and longer. The ratio of the diamond should to be considered, for it affects the shape of the diamond. If you prefer a longer oval shape diamond, you need to look for one with a larger ratio, while those who prefer a more rounded form you need to look for a diamond with a smaller ratio.

Like other fancy shapes, Oval cut diamonds can be affected by a gray to black bow tie which appears across the width of the stone. This bow tie affect will not be noted on the diamond grading report, although it can be seen clearly with the naked eye. 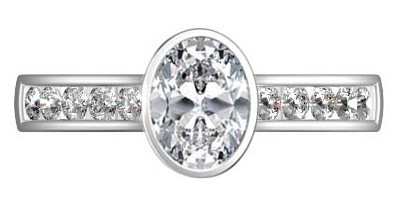 The oldest known diamond cut is a simple enhancing of the rough’s original shape. Bit by bit, jeweler’s modified the rough’s outline, in time creating outlines unlike the original eight sided die. Along with blocky table cuts emerged a rounded diamond shape, the oval.The first known oval cut diamond was recorded in 1304. Paintings featuring diamonds during the medieval and Renaissance were dark, though as the centuries moved on, cutters learned how to facet diamonds to increase their scintillation. Since the development and popularization of the oval brilliant, their light show is comparable to a round brilliant diamond.  One of the most famous oval cut diamonds is the Koh-i-Noor. Derived from the Persian words “mountain of light,” this diamond spent centuries crossing continents, traveling from one royal family to another. When it was first displayed in Great Britain in 1851, viewers waited in lines hundreds of people long to get a glimpse of the then-186 carat marvel. The diamond is still among the British Crown jewels, currently set into Queen Alexandra’s coronation crown.

Another oval cut diamond named for light is the Noor-ul-Ain, or “light of the eye.” Part of the Iranian Crown Jewels, this pink diamond measures 60 carats. It’s set into a tiara of the same name, created by Harry Winston in 1958. The oval diamond is mounted in platinum and surrounded by hundreds of yellow, pink and white diamonds, their hues enhancing the gentle rose of the Noor-ul-Ain.

Oval cut diamonds have a long history, undergoing many changes since their early years. Once dark, they now shine. From mysterious origins, they’re considered worthy to be the shapes for crown jewels. Ordinary person or royalty, they have the power to charm those who see them.