A Cushion Cut has a rectangular or squarish outline with curved sides and rounded corners, resembling a pillow or cushion. This shape went out of style after the 1920’s but it is becoming popular again

The modern cushion cut diamonds tend to have one of three pavilion surface patterns. Due to these differences this cut is sometimes referred to as a ‘modified cushion brilliant,’ which is noted on its diamond report. The form can vary from a long rectangular shape to a squarish shape and as well as in table size and depth percentage. Its larger facets makes it easier to see inclusions on a cushion cut; it is recommended to search for one with SI1 clarity or better.

Cushion cut diamonds have brightened jewelry longer than standard round brilliants. They stand as glittering pieces of history, showing what earlier jewelers did to try to make their diamonds shine as much as possible. Cushion cuts are still crafted today.

Early cushion cuts didn’t have a standard shape, often sitting between a square and an oval. Cutters aimed for symmetrical facets, though the number of facets tended to vary wildly from one stone to another. Today’s cushion cut diamonds are a squarish shape with rounded sides and cut corners. Leaps in technology allow them to be brighter than their earlier counterparts. They’re still favored by cutters who want to keep as much weight from a diamond as possible.

A number of famous diamonds are cushion cuts. One example is the 317.4 carat Cullinan II, cut from the largest diamond ever mined. It was likely formed into its rounded rectangular shape as a compromise between brilliance and size. The Fancy Vivid Yellow Allnatt Diamond by contrast was probably made into a cushion cut in part to concentrate its coloring.

Cushion cut diamonds harken back to a time before round brilliant diamonds became the standard by which other diamonds were held. They have an illustrious history, and are still used today on account of their shine and weight preserving virtues. For collectors seeking a timeless jewel, cushion cuts make an ideal choice.

Cushion cut diamonds are an older cousin to the round brilliant cut diamond. Their shape often sits between a square and an oval. Cushion cut diamonds made in the 1700s to the early 1900s are known as old mine cuts, an effort by diamond cutters of old to produce bright diamonds with the technology available. Older cushions were often asymmetrical and followed the shape of the original rough. In time, jewelers developed a standard number and placement of facets, leading to the modern round brilliant cut diamond.

Modern cushion cut diamonds resemble a rectangle with broad rounded corners. They often have 58 facets, though their number and placement aren’t as codified as other diamond cuts. Their girdles may vary in thickness, with the sides thinner than the girdle around the corners. When buying a cushion cut diamond, ensure that it’s set in a way that will prevent damage, such as with a bezel mount.

A number of famous diamonds are cushion cut. There is the Napoleon Diamond Necklace, a necklace made in 1811 consisting of 234 diamonds, including 28 cushion cut diamonds which circle the neck. After spending over a century in royal hands, the necklace traveled to the US, eventually joining the Smithsonian. There is also the 243.35 carat Jubilee, a diamond with exceptional clarity and color which was cut and polished in 1896. It too is a well-traveled diamond, going from South Africa to the UK and India, before it was sold to fund a charity trust. 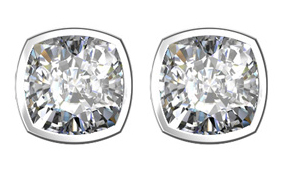 Originally at 287.42 carats, the Tiffany Yellow Diamond is one of the largest yellow diamonds ever mined. Shortly after its discovery in 1877, it was purchased by Tiffany and Company, giving the diamond its name. It was faceted into a cushion cut diamond by the gemologist George Kunz, bringing the jewel to 128.54 carats. This particular cushion cut diamond has 82 facets, with eight placed on the pavilion to create the impression of a star when viewed from the table. The Tiffany Yellow was eventually mounted into a brooch by the designer Jean Schlumberger and worn by Audrey Hepburn to promote the movie “Breakfast at Tiffany’s.”

The Archduke Joseph Diamond was mined from Golconda, India. Much of its early history is unknown, with its first recorded owner being its namesake, Archduke Joseph August of Austria, born in 1872. The cushion cut diamond once measured 78.54 carats, though it was re-cut to 76.54 carats in the 1990s for improved clarity. The diamond has D grade color and is Internally Flawless. On November 13th 2012, Christie’s auctioned the diamond for $21.5 million dollars, achieving record price for D color diamonds.

Discovered in 1985, the Golden Jubilee Diamond is the world’s largest faceted diamond. It originated from the South African Premier Mine as a 755.5 rough. Despite its size and fancy golden brown color, the jewel had many surface reaching cracks that threatened to stone’s stability. A special room had to be constructed in order to cut the diamond, so outside vibrations wouldn’t break the jewel. It took two years to turn the rough into a 545.67 carat cushion cut diamond. The diamond currently belongs to King Bhumibol Adulyadej of Thailand.