The Asscher cut is a square shaped cut with cropped corners. Instead of displaying the sparkle in the diamond, it highlights the stone’s clarity. Asscher cut diamonds were well-loved in the 1920’s, though due to the entry of new and innovative trends in the modern diamond market, they gradually lost their popularity. There was a time when such cuts were hardly available in jewelry stores, leaving collectors to search in renowned antique shops.  In 2002, the royal cut gradually started to leave its mark of existence in modern competitive markets.

Only a handful of diamond cuts can pinpoint their birth to a specific time and place. Fewer still are named after their creators. The Asscher cut diamond has been around for a 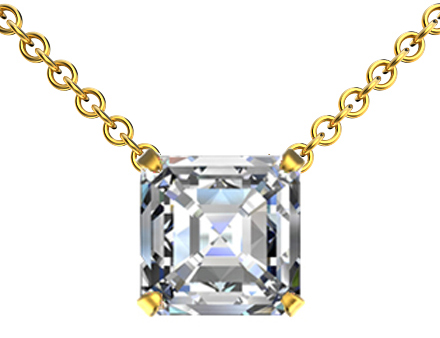 little more than a century, gaining a prestigious reputation.

What would eventually be known as the Royal Asscher Company was founded in 1854 by Joseph Isaac Asscher, starting a family business that continues to this day. His son, also known as Joseph, created and patented a diamond cut in 1902. The Asscher cut has a square shape, but with faceting and lighting akin to an emerald cut.

There are two types of Asscher diamond cuts. Both are square with cut corners and facets that sit parallel to one another. When viewed from the top, an Asscher cut features concentric squares with an X running through them all. The original version is made of 58 total facets with three rows of facets on the lower part of the diamond, and three rows of facets on the upper portion. Its cutting style invites more play between dark and light spots than other step cut diamonds.

The patent for the original Asscher cut expired during the 1940s, allowing a number of other diamond firms to create their own version of the Asscher cut. Some manufacturers kept close to the original design, others experimented with the number and placement of facets, and still more called their cuts by another name, such as “square emerald.”

Simplicity, bright sheens, and an industrial look are hallmarks of Art Deco, and the clean lines and geometric shape of the Asscher cut helped make it a favorite cut of the period. Asscher cuts doesn’t have scatters of light the way a round brilliant or princess cut diamond does, just straight lines both diagonal and perpendicular. The square shape also made the cut fit in better with neighboring jewels, making them compatible with the gemstone mosaics beloved in fine Art Deco jewelry.

In 2001, The Royal Asscher Company introduced a new patented cut, called the Royal Asscher diamond cut. The product of two years labor by Edward and Joop Asscher, this elaboration of the older Asscher cut boasts 74 facets and greater brilliance than its ancestor. It bears has five rather than three rows of facets on the bottom of a diamond, and a higher crown, adding brilliance.

Asscher cut diamonds have a brief but busy history. Their unusual brightness for a step cut diamond made them popular during the 1920s and 30s. Other jewelers later tried to emulate the cut, altering it to suit their purposes. The Royal Asscher Company continues their family legacy of the cut, improving upon the original to make it all the brighter.