Diamond Shapes with a Common Theme

From central gems to halos, side stones and other features, round diamonds are everywhere on engagement rings. The circular round brilliant is especially popular, but other cuts are also enjoyed. These diamonds are not only versatile, but showcase different forms of brilliance. 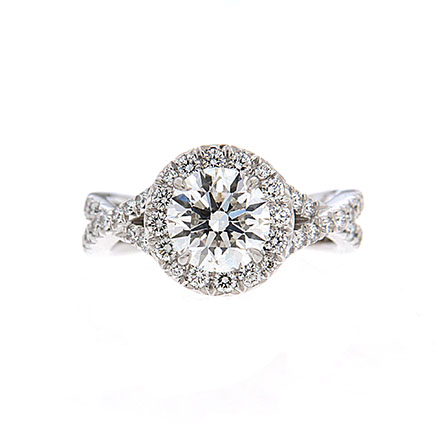 Round brilliants were developed to unlock as much brightness as possible. By adhering to strict standards of angles, ratios and other measurements, white light fills the jewel. Round brilliant cut diamond engagement rings remain bestsellers. The cut also appears in other designs, such as solitaire rings, three stone bands, diamond eternity bands and more.

Cushion cut diamonds are an older cousin to round brilliants. The cut aims to balance shine with carat preservation. Its shape is more squarish, with round corners and curved sides. Cushion cut engagement rings may appeal to those who like vintage looks, as well as the budget minded.

Oval diamonds, sometimes known as oval modified brilliants, resemble elongated circles. While the diamond shape is hundreds of years old, modern versions emulate the shine of the round brilliant. Unlike round or cushion cuts, ovals appear larger than their carat size, blending extravagance and frugality.

Melee refers to miniscule diamonds used for decorative effect. They often appear as halos, channel set gems and more. Most forms of melee appear as round jewels, mostly circles. They may come together as pave mounts, or surround the finger as an eternity ring. Sometimes they do both, as in pave diamond bands.