Natural diamonds take shape under portions of the earth’s crust known as cratons. Two stones, peridotite and eclogite, provide the carbon which merge into diamonds. In this volatile environment, in the presence of diverse minerals, few diamonds are pure carbon, but contain hints of other elements or even other stones inside their crystal. 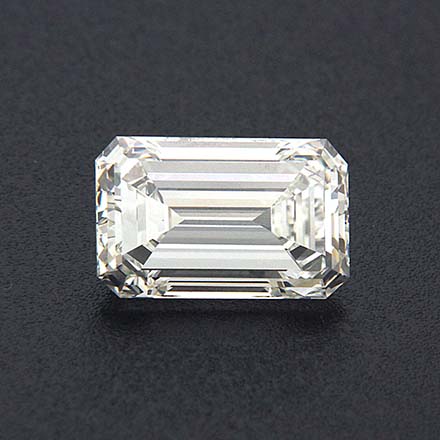 Diamond types are a form of categorization which measures the chemical purity of diamonds. Type I diamonds are by far the most common type, with over 95% of jewels falling into this designation. Such stones have traces of nitrogen in their crystals, replacing some of the carbon atoms in their chemical structure. Type I can be further divided into Ia, Ib, IaA and so on, depending on how nitrogen atoms manifest within the jewel.

It’s not uncommon for diamonds to have other materials within their crystal large enough to be viewed at 10X magnification or even with the naked eye. Depending on the nature of the included stone, it may be catalogued as a crystal, needle, knot or other designation. Most are contained in the finished diamond, though some included minerals such as knots may reach the surface.

Diamond types may influence the appearance of the stones. Nitrogen may cause a diamond to appear yellowish. Often this hue is subtle enough to give the diamond a modest tint. On rare occasions, there’s enough nitrogen to give diamonds intense enough hues for a Fancy designation. Type IIb jewels may appear blue from the boron, and Type IIa may have no discernable color. Diamonds with crystal inclusions might have enough materials to change hue, or form a whimsical image which catches the eyes of connoisseurs.

These many quirks to diamond purity is invaluable for identifying jewels. By analyzing diamond type, gemologists are better able to which diamonds are more likely to be natural and which are more likely to be laboratory made. Diamonds that are the latter are set aside for closer examination. Inclusions such as crystals inside the gem help to distinguish individual diamonds from one another. Grading laboratories may even mark the location and nature of these minerals onto diagrams for later reference.

Clues from Clarity Characteristics
Diamonds are admired for the way they interact with light, making them a favorite gemstone for jewelry. They are also valued for their hardness and the way they conduct heat, which leads to industrial applications. As natural diamonds are ancient, millions of years old if not more, they serve as a source of fascination for geologists.

Inclusions are a type of clarity characteristic encased within the diamond crystal. While some inclusions, like feathers, are related to quirks of the diamond, others are separate minerals within the jewel. Sometimes diamonds serve as time capsules, containing materials that provide insight to a younger earth.

The Carnegie Institute of Washington uses diamonds to gain better understanding of what the earth’s mantle was like countless years ago. Researchers examine the jewels to gauge how they grew, where their carbon and trace nitrogen may have originated, and the depths in which they formed. From there, they can estimate what minerals contributed to the diamond’s carbon, what carbon isotopes are in the stone, and the ratio of these isotopes.

Large diamonds with low nitrogen content may contain inclusions with a mixture of iron, nickel, carbon and sulfur melted together. Other inclusions found with this melt imply that these rare diamonds formed in unusually extreme depths, up to 750 kilometers below the earth’s surface. At the same time, these clarity characteristics hint at the chemical composition of the lower mantle.

Other developments include estimating the age of a stone. A small percentage of diamonds contain a particular sulfide within their crystal. These inclusions are cut out of the jewel and their chemistry is examined to estimate when it was formed. Between the age of the diamond and where it was mined, geologists learn more about the ancient earth.