Diamonds are gemstones millions of years in the making, formed under intense heat and pressure 75 to 120 miles beneath the earth’s surface. Over time, volcanic eruptions bring the jewels higher up the earth’s crust, where they’re eventually gathered. India has the longest history of diamond mining, its activities first recorded in the 4th century BCE. For many centuries, India was the world’s primary source of diamonds, until it was supplanted by Brazil in the 1700s. Deposits in South Africa and other parts of the world ensure a steady supply of diamonds. 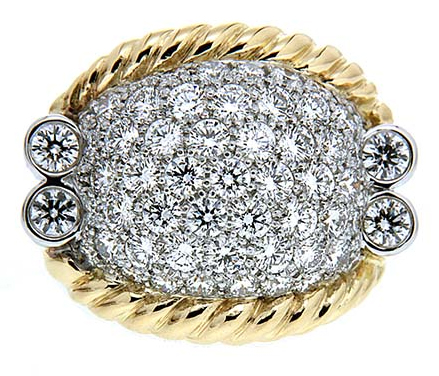 The supreme hardness of diamonds meant that the first diamond cuts mostly involved cleaning and evening the sides of the rough. In Europe around the 14th century, diamond cutters began shaping diamonds into table cuts, geometric shapes that placed little emphasis on internal brilliance. Later old European and cushion cuts brightened the jewels, though play of light inside these stones varied, as there wasn’t a widely followed standard for shape or cut.

In 1919, PhD student Marcel Tolkowsky published “Diamond Design.” This 104-page paper outlined the ratios, proportions, shape and facets needed to create a then-unheard of level of brilliance within a diamond. From “Diamond Design,” the round brilliant cut diamond was born. Following Tolkowsky’s ideas, light is able to enter the top of a diamond, reflect off of its internal facets and exit through the top facet to the eye of a viewer. His standard is the basis for modern brilliant cut diamonds.

While the 1919 round brilliant diamond was a ground breaking innovation, many jewelers seek to improve on Tolkowsky’s original design. Common variations include adding a facet to the very bottom of the diamond to prevent chipping, or adhering to even stricter standards of proportions. Other styles aim to provide brilliance while preserving carat weight, like princess or radiant cut diamonds. Still more shapes aim for whimsical designs, like heart diamonds.

In the 1950s, the Gemological institute of America developed the 4Cs grading system. Prior to this, many companies had ways of evaluating diamonds, but the terms were vaguely defined, and there was no agreed upon standard. Examining a diamond’s cut, color, clarity and carat weight provides a global grading system easy for jeweler and clients alike to understand.

Carat is a unit of measurement equaling 200 millimeters, or on fifth of a gram, and is used to determine the size of a jewel. The larger the diamond, the rarer they become, increasing their value. Diamonds are weighed in specially designed scales topped with sealed chambers that prevent air current and other environmental factors from influencing the results. A device on the back of the scale indicates whether or not the machine is level. Under these circumstances, the diamond can be weighed with the utmost precision.

Due to the environment most natural diamonds form in, the majority of stones have trace amounts of nitrogen which may tint the diamond. They most often appear as shades of yellow or brown, and can be quite subtle, or apparent to the untrained eye. Diamonds are graded on a scale of D-Z, with D having no trace of color, and Z with slight but visible shades of color.

Clarity measures the quirks in and on a diamond that may influence the aesthetics of the jewel. They may be as varied as an extra facet on the girdle, a microscopic mineral within the stone, or a section where the diamond crystal has distorted. Since natural diamonds form under intense pressure, flawless diamonds are extremely rare; a jeweler may only see one in their lifetime. Gemologists treat clarity characteristics as the jewel’s fingerprint, helping to distinguish one diamond from another. Most characteristics can only be seen under magnification, with some only discernable to a trained eye. Diamonds are evaluated on a scale of Flawless to Included 3, with a total of eleven grades.

The cut of a diamond determines how well it takes in and reflects light. Ideally, there should be a balance white light, prismatic light and shadow. Careful adherence to symmetry, proportion and depth ratios help to bring about a diamond’s best shine. The factors that make a diamond cut beautiful varies by cut, complicated by the standards brought forth by different patents and aesthetics brought forth by different organizations. Diamond cuts are graded on a scale of Excellent to Poor, depending on its brilliance. 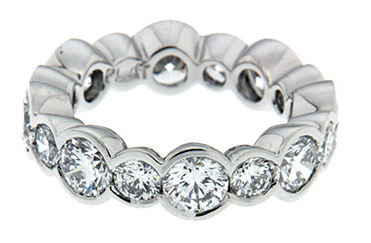 The strength and clarity of diamonds inspired centuries of legends. Pliny the Elder called diamonds not only the most precious of gemstones, but of all human possessions. He also wrote of diamond’s ability to banish fear, as well as to cure poison and madness. Other writers, like Saint Hildegard, wrote of the power of diamonds to banish evil and empower its wearer.

Before the chemical composition of diamonds were discovered, many guesses arose as to their makeup. Plato believed that diamonds originated from the stars and had the ability to make gold. One 17th century chemist felt that the clarity of diamonds meant they were made from water. French chemist Antoine Lavoisier conducted an experiment in 1772 involved placing a diamond in an oxygen rich atmosphere and using a lens to shine a concentrated ray of sunlight. The resulting gases determined that diamonds were made of carbon.

Diamond rings have centuries long reputation of signifying love and devotion. The tradition started in 1477, when Mary of Burgundy received a diamond engagement ring. Her fiancé used the hardness of the jewel to symbolize the everlasting nature of their love. Diamond engagement rings quickly became popular among the upper crust and eventually all classes. The folk ballad Hind Horn expands upon diamond rings as a tangible sign of love. In the story, a magical ring is used to help Hind Horn and his beloved princess keep in touch, no matter how far away they are, or their circumstances.