Diamonds are carefully cut so light enters the jewel at optimal angles for brilliance. When other matter such as grease or soap cover a diamond, the angle light needs to brighten the diamond changes, but the stone does not. The diamond loses its shine, but can be restored through cleaning. Various tools are used to clean diamonds, each with different effects. 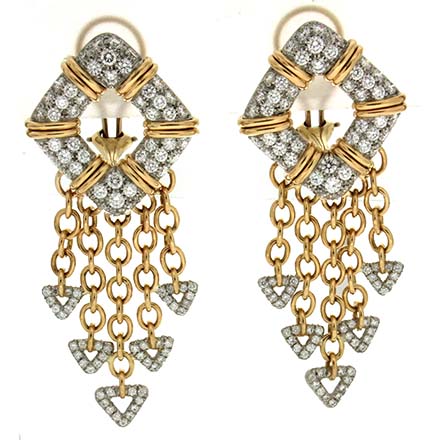 Lint free cloths are used to wipe debris from diamonds. This approach is ideal for those who want pristine jewelry, but wish to be as careful as possible. Before using the cloth, it’s best to make sure that the material is clean. While lint free cloths are a gentle way of restoring brilliance, they may have trouble reaching into the crevices of mounted jewelry.

A soft toothbrush with warm water and mild detergent can clean all but the most fragile of jewels. Bristles allow the toothbrush to access areas larger items may not fit, enabling more surface areas to be cleaned. Lingering soap residue may further reduce brilliance, so thorough rinsing is a must.

Depending on the nature of the dirt on the diamond, a more drastic approach may be used. A mixture of water and an ammonia based detergent may be effective in removing grease and other residue. The ammonia blend may be used at room temperature, or heated in the name of greater cleanliness. When using ammonia, be sure to use gloves to protect the hands, and to clean in a well-ventilated area.

Ultrasonic cleaners are devices which use a combination of sound and liquid to clean gemstones. Jewelry is placed in the machine’s tub, and soundwaves travel through the liquid to loosen dirt. Ultrasonic cleaners are available for professionals and laypeople alike. Before using, it’s best to check jewelry for loose prongs and other fragile parts which may further weaken from the vibrations.

Diamonds Under Pressure
For diamonds to take shape, large amounts of heat and pressure are required. This in turn allows carbon to reform into tightly bonded clusters which make up the gemstone. Many jewels contain imperfections in their basic structure, which in turn influence their appearance. This has allowed for experiments in pressure.

Diamonds at their smallest are made of five carbon atoms linked together through shared electrons. These five atom structures may bond to other carbon clusters through still more mutual electrons, eventually forming a diamond visible to the naked eye. However, structural imperfections such as gaps in the lattice or twisted bonds may also occur.

Sometimes gaps in the diamond can influence the jewel’s appearance. Type IaB diamonds for example have clusters of nitrogen among the carbon surrounding an empty space where an atom should be, known as a vacancy. This gives the jewel a visible brown or yellow tint. Clusters of vacancies can also turn a diamond brown.

Researchers have taken diamonds believed to have vacancies and subjected them to intense pressure and temperature, similar to how the jewels originally formed. The change in environment influenced the diamonds’ molecular structure, forcing atoms into places that were previously empty. This in turn influenced the jewels’ appearance, altering their tints.