Needles in the Gemstone

Many gemstones, including diamonds, form under drastic conditions within the earth, often as a result of intense heat or pressure. The circumstances of their creation can be found within their crystals as clarity characteristics. These can take on many types, such as healed fractures, gas bubbles, or other minerals inside the jewel. Some clarity characteristics may be long and thin, resembling needles.

Many examples of needle inclusions are the result of thin crystals which found their way into the gemstone. While most jewels are gauged for clarity with the naked eye, diamonds are examined under 10x magnification and their clarity characteristics are carefully documented. Needles which may have gone unnoticed in other stones may be recorded in a diamond. This attention to detail helps gemologists distinguish one diamond from another.

Needles and other foreign substances in diamonds are a source of interest for researchers. The majority of diamonds were created millions of years ago, if not older. Scientists study the chemical composition of these inclusions to gain insight into ancient geology and diamond formation.

Breaks within the diamond are commonly known as feathers. Some may appear as flat and wispy as their namesake, while others may only have a slight resemblance. They’re considered an inclusion, or a clarity characteristic that appears below the surface of the diamond. Depending on the angle, feathers may seem glossy, transparent or whitish.

Large feathers are not considered appealing, especially if they’re visible face up. If enough feathers are close together, such as with a bearded girdle, parts of the diamond may take on a hazy or greyish appearance. Depending on the size and location of a feather or other characteristics, the jewel may receive a clarity grade of Included 1, 2 or 3.

Feathers, as with other clarity characteristics, help gemologists and others tell diamonds apart. No two stones have identical characteristics, making them a build in identification system. Certain gemstones may have feathers which resemble images such as crosses, hummingbirds, and even dancers, adding romance to the diamond.

In the 1950s, the Gemological Institute of America (GIA,) developed a system of evaluating diamonds by cut, color, clarity and carat, known as the 4Cs. Until this time, jewelers used many terms and grading systems to describe their diamonds, but standards were loose and some ratings contradicted others. The 4Cs have been modified over time to fill in the needs that weren’t addressed when the grades were first created. 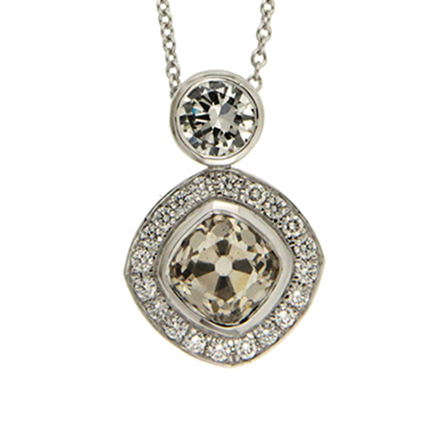 Ever since diamonds were mined and sold, vendors would describe their quality to interested people. Buyers had no way to verify if a cut was well made, or if two sellers’ description of “with imperfections” referred to the same variety of clarity characteristics. As diamonds became more available and in demand, the chances for confusion grew.

Early attempts to give diamond grades included phrases like “Cape Silver,” “Jager,” “River,” or other terms inspired by diamond mine locations. Other scales used letters to provide grades, with some using “A” to designate top ratings. Competitors would use double or triple A grades to make their ratings stand out, though what constituted a pinnacle grade was inconsistent.

One of the purposes behind the term “4Cs” was to create an easily remembered measure of diamond quality. The idea was that the alliteration would not only create a mnemonic, but also help jewelers remember the concepts behind each C, such as what goes into a cut. While the 4Cs were originally formed with the diamond industry in mind, by 1962 the phrase had caught on with the public.

The first clarity grades had a scale of Flawless, Very Very Slightly Included 1, and so forth until Imperfect 2. The original ratings held nine grades, but Internally Flawless was added in the 1970s. This was in response to diamonds receiving poor cuts to remove all surface blemishes in the name of getting a higher clarity grade. Imperfect 3 was also added during this decade. It wasn’t until the 1990s that “Imperfect” changed to “Included.”

When GIA developed its color scale, it selected “D” as the lightest hue. This was partly to distance the 4Cs from other grading scales which used “A” or “AAA” for top ratings, reducing confusion. “D” was a signal that GIA meant to be different from others. It is also an artifact from when the 4Cs was designed as an industry only standard, when “D” chosen with the idea that few would associate the letter with pinnacle color.

Diamonds are in great demand in part to their aesthetics. Most diamonds are cut to showcase how the jewel interacts with light, while others are fashioned to highlight clarity or improve their color. Still more diamonds are cut into whimsical shapes such as pears or hearts. However, beauty can be subjective, while people who wish to purchase or sell the jewels want the stone’s quality to be conveyed in concrete terms.

The Gemological Institute of America developed the 4Cs grading system to provide a universal, objective means of establishing diamond quality. Carat, Cut, Color and Clarity each have their own grading scales, designed to be understood by both professionals and laypeople alike. Along with these standards, GIA offers diamond certification attesting to a gemstone’s 4Cs.

Carat measures the size of a diamond, with one carat equaling one fifth of a gram. While the difference between a quarter carat and half carat may be apparent, with other jewels carat may be subtle, varying by fractions. Diamonds are often weighed on powerful designed to be as accurate as possible. The stones are weighed to the fifth decimal point, which is rounded to the hundredth of a carat on the report.

Cut determines how well a diamond has been influenced by human hands. An ideal brilliant cut should display a balance of while light, colored light and shadow. A diamond’s proportions, symmetry, facet quantity and size are among the factors used to determine cut quality. Once GIA evaluates the cut, it’s graded on a scale from Excellent, Very Good, Good, Fair and Poor.

Most diamonds are thought to be colorless, though most have hints of brown or yellow. GIA uses a color scale of D to Z, with D diamonds as colorless and Z gems with the most apparent tint, to determine the level of tinge in a diamond. Color is graded under neutral lighting with the aid of master stones to determine the level of hue. While there are diamonds that exist outside of the D to Z scale, they are evaluated by other standards.

Clarity gauges the quirks within and on the surface of the crystal. Diamonds are examined at 10x magnification for traits such as extra facets, grain lines or pinpoints. These characteristics are marked on a diagram for easy reference. Diamond clarity is measured on an eleven grade scale, from Flawless to Included 3. The number and placement of clarity characteristics determines the grade.